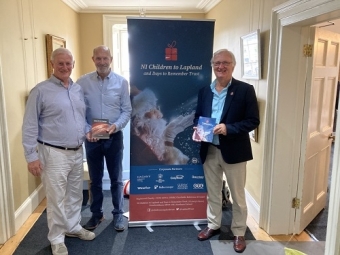 Sixty trojans of the Northern Ireland cricketing world have been recognised and remembered in a new book penned by cricket enthusiast and local expert, Clarence Hiles.

‘Gone, But Not Forgotten’ follows the life stories of these deceased heroes of the sport, who have contributed to the local game across the past century and beyond through administration, advocacy, advancement or simply by great play.

Speaking at the launch of the book, Hiles explained why he was passionate about remembering such figures:

“Cricket in Ulster has always fascinated me, particularly about the personalities, which simply would not have been possible without the contribution of these individuals.

“I have long documented Irish cricket, and had the pleasure of meeting, engaging and hearing stories of these cricketing greats - some of which have been close friends. I wanted to ensure that their legacies live on and the impact they had on the game is not forgotten.

“I was preparing this book for some time, but only during the first wave of the COVID-19 pandemic that I was able to focus my efforts specifically on these stories. This book is the result of countless hours of research, and priceless contributions from other enthusiasts in the cricket community.”

This is Hiles’ fourth book to cover the history of cricket including a biography of Thomas Andrews (Jun) who, was sadly drowned in the Titanic.  He has also produced international titles such as “50 Sporting Greats of Barbados.”

All proceeds from sales of ‘Gone, But Not Forgotten’ will be donated to a local charity, Children to Lapland Trust. Chairman from the charity, Colin Barkley, said:

“The NI Children to Lapland and Days to Remember Trust is delighted to have been nominated to receive the proceeds of Clarence Hiles’ latest book on cricket in Ulster.

“The Charity, set up in 2008, takes terminally ill, life-limited, and deserving children, from all over the Province, on a magical trip to meet Santa at his home in Lapland, a trip which creates very special memories for the children and their families.

“The Charity receives no Government or Lotto funding and, therefore, must be entirely self-funding, why is why gestures like this, from Clarence, means so much.”

‘Gone, But Not Forgotten’ can be purchased directly from the author by emailing: jamesclarencehiles@gmail.com. The book is priced modestly at £10 plus P&P.