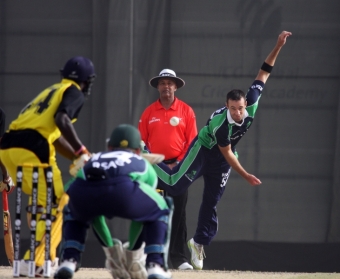 Ireland announced their squad for the three match 50 over series against South Africa A that starts this Sunday at Strabane Cricket Club. Peter Connell and Nigel Jones have been re-called to the squad having returned to full fitness recently.

Peter Connell has been recalled to the Ireland senior squad for the three one-day games against South Africa A which get under way at Strabane on Sunday.

The CIYMS opening bowler who turned 31 this week hasn’t featured in the senior ranks since playing against Australia in June 2010. To date he has won 56 caps taking 104 wickets at 20.35, with best bowling figures of 6 for 28 against The Netherlands in 2008. He is also one of only three bowlers to have taken a hat-trick for Ireland.

Ireland coach Phil Simmons said of the squad composition: “Peter Connell deserves another chance after impressing everyone during the North versus South game at the weekend. He is a proven wicket taker at international level with Ireland and when he gets it right he can be a handful for any opposition.

“Nigel Jones has been recovering from a knee injury recently so it’s good to have him back. He’s become something of a limited overs specialist and he’s never let the side down when called upon.

“This series has given our players great exposure against some fantastic cricketers, which will stand them in great stead for future challenges.”