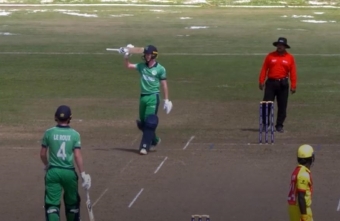 The South African-born Cox, 18, looked sparkling in his square of the wicket shots today (see video). He brought up his half-century off 61 balls, then blasted a pull shot to the boundary for his century off 111 balls – which was also the third-last ball of the innings.

Cox, who holds an Irish passport as a dual citizen and has Irish great-grandparents on both sides of his family, hit scores of 44* against Sri Lanka and 28* against Scotland in the two official tournament warm-up matches, with today continuing his run of ‘red-inkers’ in the last three matches for the Irish Under-19s. His innings today featured 8 fours and a six – he is only the fourth Ireland Under-19s batter to have scored a century at an Under-19s World Cup after Eoin Morgan, Paul Stirling and Harry Tector.

With 237 the target, the Irish bowlers struck early and always kept the Ugandan run chase in check. The left-arm spinner Matthew Humphreys, who plays club cricket for Lisburn, impressed taking 4-25 from 10 overs, while Rush’s spinning all-rounder Nathan McGuire finished with an economical 2-29 from his 10 overs

Ugandan captain Pascal Murungi hit a well-compiled 63, but his side was eventually bowled out for 197 in the 49th over.

Ireland Under-19s will next face India and South Africa in their remaining Group Stage matches, with both fixtures to be shown live on Sky Sports in Ireland / UK.

After the match, Josh Cox said about the century:

“It’s an amazing feeling, first game of the World Cup, it’s a dream come true. I always felt I had enough time to do it, and I just trusted the batters up the other end they could help me get there.”

About the bowling performance:

“Our spinners are our strength, and I thought they bowled well today – if they keep putting in performances like that then we’ll get the results.”

About facing South Africa next week:

“I’m extremely excited, I know a lot of the guys – I’ve known them a long time and played against them. I can’t wait to play them, it should be a really fantastic occasion.”