Craig Young: We went toe-to-toe for 85% of the time, we just need to find that extra bit on Tuesday 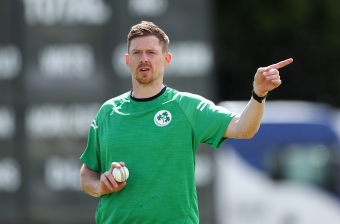 DUBLIN – Ireland international Craig Young believes his side is not far off the standard required to level the two-match T20 International series between Ireland Men and India Men to be played at Malahide Cricket Club on Tuesday.

“It was obviously disappointing to lose, but you have to put it in perspective with who you’re playing. We put up a fight there, and I think there’s a lot we can take from today’s game going into Tuesday.

“Conor Olphert played his first game there, and he knows that it doesn’t get much harder than that – he did well, as did Lorcan Tucker with his knock, but Harry’s [Tector] innings was class. He’s right up there with some of the best I’ve played with.

“Bowling out there, you need to put the ball in the right area and [in that first over] I just missed my line with the first few balls, but then bang-bang I got the line right and had two wickets. But it’s never that simple with these guys, you pitch it up to them and they just belt it over your head. If you miss your line, only a little bit, they will punish you.

“But I think there was enough in today’s performance to take forward. Yeah, it might have been nice to bowl first on that pitch, but in a 12-over game the pitch isn’t going to change much. We know the Malahide wicket always has a little in it for the bowlers - you just have to put it in the right areas. You’ve got to get the line and length right with these guys, you’ve got that small margin of error – if you miss the spot then they will blast it over your head. To be honest, I think we did get the line right most of the time, but we bowled a bit full at times, which let us down.“

As for the atmosphere in the ground:

“I’ve never played in front of a crowd like that, there was a real buzz and it was fun. But the most important thing was that we stood up against one of the world’s best sides and went to-to toe with them for 80-85% of the game – but, again, you’ve got to be on 100% of the time playing a side like that, we just need to find that extra bit on Tuesday.”

The match will be broadcast on BT Sport in Ireland / UK. For the rest of the world, the broadcast details are:

talkSPORT (www.talksport.com) will be providing commentary of both matches.

To follow the action, download the talkSPORT app, re-tune your DAB radio in the UK, listen at talkSPORT.com or tell your smart speaker to ‘play talkSPORT 2’.

Along with talkSPORT’s online coverage in the Republic of Ireland, talkSPORT is also linking up with its sister stations, FM104 and Q102 in Dublin, 96FM and C103 in Cork, Live 95 in Limerick, LMFM in Drogheda and U105 in Belfast, so listeners can hear extended coverage, with live guests, highlights and player reaction.