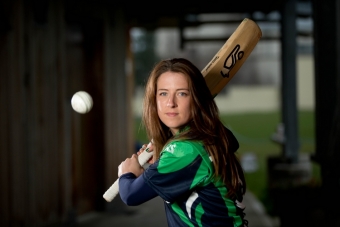 “Cricket is such a mental game that I almost find myself my toughest opponent at times." - Isobel Joyce

‘Joyce’ may be a surname known well to Irish cricket fans, but increasingly Tasmanian cricket fans are becoming familiar with one Joyce in particular - Isobel Joyce.

A senior member of the Ireland Women’s national team who debuted in 1999, Isobel is currently playing for the Tasmanian Roar (the state team for Tasmania) and the Hobart Hurricanes in the Women’s Big Bash League.

Cricket has long been a part of Isobel’s life.

“We had a ‘cricket net-shaped’ yard in the back garden at home. That’s where we all learned to play. I remember my brother Damian under-arming a ball to me when I was about 6 and teaching me the forward defence.”

While backyard cricket became part of her childhood, at the age of 11 she was watching England men play on television and having the sudden realisation that, because she was a girl, she couldn’t play cricket as a career.

“I was devastated - it took me a few years until I realised there was an Ireland Women’s team but I knew I would still never be a professional, well I thought I knew!”

Isobel has played her club cricket in Ireland for Merrion Cricket Club, but also played for Trinity Women and has been a player/coach of Trinity Men for the past two years.

Her experience in Australia, though, has helped develop her perspective on cricket.

“Cricket is such a mental game that I almost find myself my toughest opponent at times. There were times I used to psych myself out so much that I found the game was more about getting past my own demons than the opposition I faced,” she said.

“Coming to Australia has made me see myself differently and view cricket more like a job than a hobby – that sometimes helps when things get tough because you just have to find a way when it’s your job. Then again it adds another level of pressure, too.” “I’ve always loved the game - playing it, watching it, and spending time with my friends doing those things too. Some of my best friends are my childhood teammates, and I even met my husband through cricket so I can’t imagine my life without it, either as a hobby or as a job.”

“I think the most unbridled joy I’ve had in an Ireland shirt was the moment Lucy O’Reilly hit a four off the last ball in the ICC Women’s World Cup T20 Qualifier in 2015 to win us the final against Bangladesh,” she said.

“Playing in Australia is fantastic but there’s nothing like playing in the green – it feels like coming home.”

And what advice would Isobel give to a young girl considering cricket as a sport?

“Whether you want to play at the top level, play recreationally, or you simply want a fun sport where you can make some friends and support others, cricket has something for everyone.”

Playing, travelling and meeting people the world over – cricket is certainly a sport that can provide a great life experience for girls and women alike.

If you want to find out more about getting involved in women’s cricket, you can contact one of the Provincial Unions today or find your nearest local club.