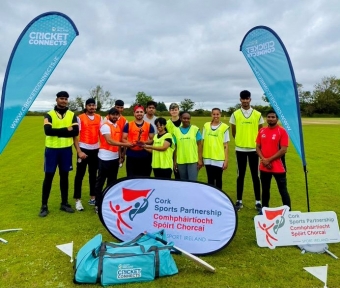 Supported by Cork Sports Partnership and Togher Community Gardaí, Munster Cricket and Cricket Ireland invited residents of local Direct Provision Centres to participate in a 6-a-side tapeball tournament as part of the first in-person activity of the Cricket Connects programme.

The Cricket Connects programme - supported by Sport Ireland - aims to engage people and groups not currently accessing cricketing opportunities to expand playing, volunteering and coaching of cricket. The main objective is to get more people, more involved, more often.

Players from Drishane Castle, Millstreet and Kinsale Road Accommodation Centre arrived to play in the mixed, friendly tournament with a range of experience amongst the group from complete beginners to Club and youth international representatives. Umpire Arsalan Khalid, known to some of the participants for his work as a Development Officer and Coach with Munster Cricket, controlled proceedings from the middle, keeping players and scorers on their toes with his good-natured quips, even stepping in to bowl and field for a couple of overs.

Cork Harlequins all-rounder Joe O’Mahoney worked throughout the week to prepare the wickets and outfield and provided some quality umpiring and bowling during the tournament. Max Egan who currently plays at ‘Quins and earlier this summer supported the Smash It and It’s Wicket! programmes at the Club as an Activator, umpired with added commentary to much acclaim.

Having completed their online Cricket Connects Leadership and Coaching training earlier this year, Mustak Ahmed and Zubair Hassan, both now Cricket Connects Champions, represented the Kinsale Road Accommodation Centre with Mustak captaining his team. For their first time participating in cricket since arriving in Ireland, the Drishane Castle, Millstreet residents were led successfully from the front by Crystal Nolan and Sam Meyer.

Commenting on being involved in the programme, Crystal shared her cricketing background laid in indoor cricket and that she and her team spent weeks leading up to the tournament learning the laws and encouraging each other to get out and train daily. Buoyed by their experience at the Super 6 tournament, Sam enthused: ‘

“The new gear will really help us, others and the kids especially here at Millstreet. We already have some new members on our Drishane Women’s Cricket Team who joined just this afternoon when we got home, we are really excited to make big things happen.

Speaking about the event and the importance of getting people out and playing cricket, General Manager of Munster Cricket Joe Moynihan said:

“We know it’s so important for peoples physical and mental health to have a place to go, participate successfully in physical activity and spend time around others. We’re incredibly happy to be able to work alongside Cricket Ireland to bring that positive experience to everyone participating in the Super 6 tournament today, especially given the Leadership training element that has already taken place online. The Champions now are keen to coach and umpire with us at Munster Cricket which is a credit to themselves and a huge bonus to us at Munster Cricket.”

Reflecting on the importance of partnerships in making events like the Super 6 tournament possible, Joe added:

“Today’s event has been made possible with the support of Cathal, James and Maurice at Cork Sports Partnership who have been fantastic in getting the word out there to players and arranging transport. I think what’s as important as today’s event is that the intention now is there to work alongside the people who have made an effort to participate so enthusiastically today and work together to provide more opportunities for training, playing and really getting out and becoming part of the Irish cricketing community. I know the commitment is there from Cricket Ireland to make more Cricket Connects events happen and together with ourselves and Cork Sports Partnership, we are really looking forward to hopefully working alongside all Provincial Union’s to progress this programme.”

And that's a wrap Congratulations to both teams #CricketConnects pic.twitter.com/jOwbXbgPxT