Cricket in the corridors of power in Brussels 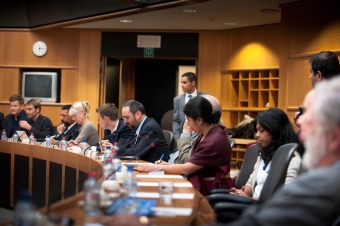 Members of the European Parliament, aides, interpreters and visitors to the Parliament’s Brussels complex may have been surprised last week to see cricket being played in the corridors of power.

The occasion was an exhibition by ICC Europe, designed to introduce the world’s second most popular sport to representatives of the European Union’s 27 member states, 22 of which are also members of the ICC.

One of the open spaces in the Josef Antall Building was turned into a demonstration area, where passers-by could not only find out something about the game but try their hand at batting and bowling into the bargain.

Many of those intrepid enough to take up the bat – interpreters from Romania, Hungary and Spain, visitors from Turkey, Poland and Japan, a Dutch MEP – proved to have plenty of natural talent, while even those who did not test their practical ability were keen to learn about a sport about which they had only heard. For many of those who stopped to chat, it was news that organised cricket is played in their country.

The event also included a panel discussion, chaired by UK MEP Syed Kamall and introduced by His Excellency PM Amza, the Sri Lankan ambassador to Belgium, Luxembourg and the European Union. Mr Amza stressed that cricket is ‘one of the things of our colonial heritage that we still cherish’, and referred to the place of the game in the reconciliation process following Sri Lanka’s civil war.

The central part of the forum comprised a series of presentations, in which Regional Development Manager Nick Pink discussed with Cricket Ireland chief executive Warren Deutrom the choices which led to Ireland’s five-year run of international success and the changes in governance which helped make it possible, Denmark’s Ole Roland described the government-funded integration project and the web-based Spilcricket system which the DCB has developed to take cricket into the schools. Marike Dickmann of the Netherlands spoke about the KNCB’s Youth Plan which aims to expand cricket’s base through co-operation between clubs, schools and local authorities, and Jacqueline Morel of the French Union sportive de l’enseignement du premier degré  (USEP) described the collaboration between her organisation and France Cricket which is introducing the game to primary school children, initially in Brittany but expanding to other regions.

All speakers agreed that cricket was proving an ideal game for development in schools, since as a non-contact sport it can be played by mixed teams of boys and girls, and an excellent medium for integrating diverse communities across the countries of the European Union.

The forum concluded with an announcement by Mr Kamall of the establishment of a parliamentary interest group for cricket, which will aim to ensure that the momentum created by this initial visit is not lost.

“This exhibition and panel discussion was an important starting point,’ Nick Pink said afterwards, “enabling us to promote the message of cricket within the European Union, and specifically Parliament.

“We have managed to bring together a balanced group of MEPs from a range of countries and from across the political spectrum, and we look forward to working with them in the future to ensure that the contribution cricket can and does make to European society is fully recognised,” said Pink.