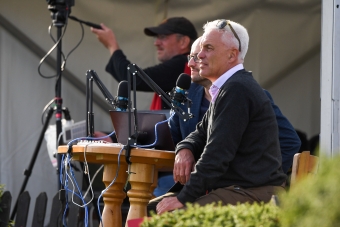 DUBLIN – Cricket Ireland today announced HBV Studios as its livestream partner for a three-year period, with up to 40 matches being streamed alone during 2021 – the largest number of elite cricket fixtures ever covered by livestream in Ireland.

Additionally, many of the fixtures being livestreamed will feature multi-camera coverage and commentary, and fans will be able to enjoy following the games through the interactive match centre which will feature highlight clips and real-time statistics.

“Our purpose is to grow the sport, and visibility of our talented men’s and women’s cricketers is an essential component of that. Despite the challenges of 2020, we launched our new interactive match centre and provided livestream access to all Inter-Provincial Series and Super Series fixtures, as well as the Clear Currency All-Ireland T20 Cup Final. In tandem with our partners at HBV, we have been working hard to improve this service year-on-year for our fans globally, and today is a major step forward in that goal.”

“There are up to 40 matches being covered by this agreement from international to club level, and we welcome HBV Studios partnership in helping to bring these games to our fans on a ball-by-ball basis. We know there is a great deal of interest in Irish cricket, as can be shown by broadcast and livestream viewing numbers, and we only see this interest growing as our livestream product improves every year.”

“A key commitment in our recently launched Strategic Plan 2021-2023 is to raise the profile of the women’s game in Ireland. This announcement today will help us take a big step in that direction by allowing us to bring Ireland Women’s home internationals and the Super Series to fans during these COVID-restricted times.”

“We’re delighted to sign this three-year agreement with Cricket Ireland - one of the largest of its kind between any National Governing Body and broadcaster in Ireland. To be able to stream up to 40 games this year I believe will have an enormous impact on cricket throughout Ireland.”

“Having broadcast cricket in Ireland over the past eight years, I now feel we are in a very strong position to deliver a quality production with quality commentary. We will be using some of the finest cricket commentators the Irish game has to offer.”

“We will also be working with Cricket Ireland on the advertising rights to the games we will be livestreaming, which will be a wonderful opportunity for potential sponsors / advertisers to get involved with one of the fastest growing sports in Ireland. We expect our commercial department will be very active over the coming months and years.”

“I am particularly looking forward to broadcasting so many women’s games and it will be a great privilege to show the Irish cricketing public and fans of cricket worldwide just how talented our young female cricketers are.”

“Our thanks to the staff at Cricket Ireland for their commitment to this major project. Finally, it would be remiss of me not to mention my colleague Colm O’Neill who for so many years has been the driving force of livestreaming technology in Ireland.”

An expert commentary team will be announced ahead of the season, with bonus content and interviews from many games being available on Cricket Ireland’s website and social media channels throughout the season.

A full livestream programme for 2021 will be released shortly.