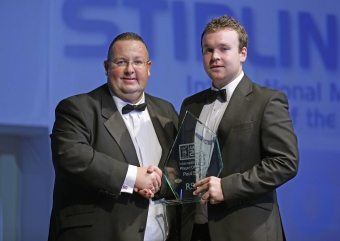 Ed Joyce, William Porterfield and Max Sorensen have been short-listed for the RSA International Men’s Player of the Year award.

All three enjoyed excellent seasons which saw Ireland qualify automatically for the 2015 World Cup finals in Australia and New Zealand, and reach the final of the ICC InterContinental Cup, which will be played in Dubai in December.

Sussex captain Ed Joyce scored 506 runs at an average of 63.25, including centuries against Pakistan and The UAE - making 155, his highest score for Ireland . In addition he made an unbeaten 96 in the crucial World Cup qualifier against The Netherlands. Ireland captain William Porterfield was the epitome of consistency during the season, making 675 runs at 56.25. He scored hundreds against UAE in Sharjah, and memorably in the RSA One-Day International Challenge against England at Malahide - a match attended by a record crowd of 10,000 in glorious sunshine in early September. That took his tally of centuries to ten - an Irish record. In addition he made a further five scores in excess of fifty, as Ireland continued to dominate their Associate peers. The Hills paceman Max Sorensen enjoyed a fantastic campaign with the ball, taking 21 wickets at 18.33. His return included five wicket hauls against a very strong Australia A side at Stormont, and versus traditional rivals Scotland in the InterContinental Cup at Castle Avenue. Laura Delany, Isobel Joyce and Clare Shillington are the short-listed nominees for the Women’s accolade. The Irish Women emulated the success of the Men by qualifying for the final stages of an ICC World event when they defeated The Netherlands in a thrilling contest at YMCA in August. The squad will travel to play in the ICC World Twenty20 in Bangladesh in April 2014. Irish captain Isobel Joyce from Merrion Cricket Club - who made her 100th appearance during the successful T20 qualifiers - scored 167 runs at 18.56, and captured 3 wickets at 47.33. Last year’s winner Clare Shillington from Malahide Cricket Club enjoyed another productive season, scoring 373 runs at 37.30, which came at an incredible strike rate of 116.92. The Malahide opener scored the only century of the season - an unbeaten 114 against Japan at The Hills. The RSA Cricket Ireland Awards will take place on Friday 11th October in the Hilton Double Tree Hotel (formerly the Burlington) in Dublin. For further information about the awards and to purchase tickets for the gala cricket event of the year, please visit http://www.cricketireland.ie/about/awards or email awards@cricketireland.ie