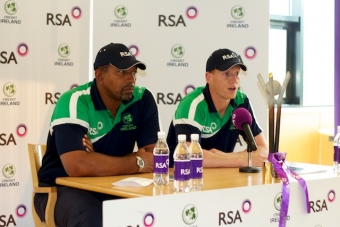 Coach Phil Simmons and his selectors have once again gone for experience with no fewer than eight of the thirteen named players based with county sides.

Kevin O’Brien became the latest of those on Sunday when he signed a T20 contract with Somerset.

Boyd Rankin misses out as he continues his recuperation from a foot injury, but Simmons feels Middlesex seamer Tim Murtagh will prove an able replacement.

“Although Tim Murtagh hasn’t played for Ireland yet, he’s been bowling superbly for Middlesex so that will soften the blow of losing Boyd. Max Sorensen and Trent Johnston were fantastic in the UAE so we have plenty of options in the squad having so many all-rounders. I’ve been following the English based players and there have been some fantastic performances from them at various stages this season.”

Niall O’Brien is back into the squad following his exclusion from the ICC World Twenty20 qualifiers with Simmons adding;

“There’s no doubt he’s among the best 14 players that Ireland have, but Gary Wilson did superbly in the UAE, so Niall knows he’s going to have work hard and be at his best to regain the gloves.”

On the challenge against Australia, Simmons knows it’s going to be tough;“They’re a quality side and it’s going to be extremely difficult. They’re preparing for five ODI’s against England and players will all be looking to cement their spot in the team. With Mike Hussey withdrawing that frees up a batting slot and their guys will all be keen to fill it.

“We had a great opportunity to beat them two years ago and threw it away. We’ve learned from that and are two years more experienced now - I’d back us to win that game at this stage given the same chance. These games are the sort of fixtures we’ve been crying out for and hopefully there will be many more of them in the coming years.”

Ireland captain William Porterfield is looking forward to the fixture saying: “It’s going to be another fantastic occasion in Belfast as we take on Australia. We relish the opportunity to take on the top teams and they don’t come much bigger than the number one ranked team. We missed a great chance to beat them in Dublin in 2010 but we’re learning all the time and have gained more experience of getting over the finishing line as we showed against England in the World Cup last year. Playing in front of your home fans gives all the players a great buzz, and with a capacity crowd behind us we’ll be doing our level best to capture another Full-Member scalp.”

The Ireland squad in full is as follows:

Tickets for the RSA Challenge ODI between Ireland and Australia are available on www.ticketmaster.ie