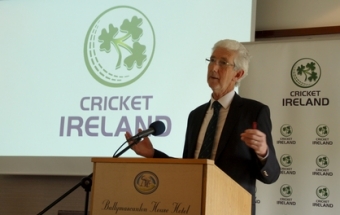 Mr O’Connor, Mayor of Fingal from 2015-2016, recently stood down from his Council duties after almost 19 years on the job in advance of taking on the President’s role at Cricket Ireland.

Speaking at the AGM, he said:

“I’m very proud to represent my club North County, Fingal and Leinster cricket by becoming President of Cricket Ireland. It will be an exciting year ahead and one which I’m looking forward to watching Irish sides – men, women and underage –  at home and on the world stage.”

“While it’s indeed a great honour personally, I’m very conscious of the footsteps I’m stepping into and am delighted to be following our first-ever woman president Aideen Rice. Aideen has done a fantastic job travelling Ireland and the world to represent us all. She had a lovely style and panache about her, she threw herself fully into the role. It was particularly great she was there for our women cricketers, and I hope I can continue to represent all cricketers - international and local - across Ireland as well as Aideen did.”

Outgoing President Aideen Rice also spoke as part of the AGM, and in an emotional speech she acknowledged her sadness and respect for the people of Sri Lanka – telling the room only a few months before the recent terrorism attacks that she and Cricket Ireland Chair Ross McCollum, as part of following the Ireland Wolves tour, were staying at some of the very hotels to that recently suffered attacks.

After the formal proceedings, Ms Rice talked about her last 12 months in the role:

“There were so many highlights from the year – for me in the role it started with the first men’s Test Match. Just the sheer scale of everything about it - the media, the hospitality, even the match itself, it swung around like a good Test Match should.”

“The two T20Is against India - two 10,000 sell-out crowds – were also great occasions. And I was of course delighted to be in Guyana at the World Cup to represent a women’s team on the world stage.”

Asked what the biggest learning or insight she took from the role, Aideen said:

“Those winter tours – the Wolves in Sri Lanka, the women’s world cup in the Caribbean and the men’s series in India - those experiences really gave me an insight into what it was to be a professional cricketer. They showed me that there is amongst our players a single-minded commitment to the job. And it is what it is - a job. They were not there for a holiday, and worked nearly every day.”

And some advice for the incoming President?

“Enjoy it. There is tremendous variety in the role - you’ll see parts of Ireland you may never have seen before, and you’ll certainly see parts of the world you’ve never been to before. It is very enjoyable to receive a great welcome wherever you go as President, so just commit to enjoying every moment and the time will fly.”