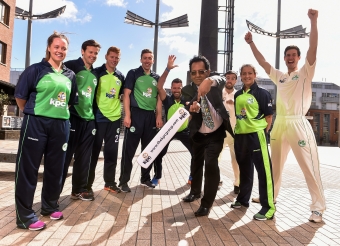 Cricket Ireland have launched an ambitious five-year plan to become a mainstream sport, with the goal of taking the game to new audiences and beginning to rival the popularity of football, rugby and GAA by 2020.

Not content with grabbing the headlines every few years with stunning performances on the global stage - like beating Pakistan, England and the West Indies at the World Cup - cricket wants a permanent place in the consciousness of the Irish public.

“When we think of ‘major’ in Ireland, we think of GAA, rugby and football. Well, why not cricket too?,” said Deutrom. “We need to shift perceptions of cricket as an elitist, exclusive sport to one that is open and accessible to ALL. We need to de-mystify the sport for the Irish public by making it visible, accessible, affordable and inspiring.”

More games against Full Members is one way of achieving this aim and Deutrom revealed two further fixtures for the men’s senior team against Hong Kong in September.

These are in addition to the 11 ODI’s already scheduled against Sri Lanka, Afghanistan, Pakistan, South Africa and Australia this year, while a further announcement of more ODI’s in 2017 will be made tomorrow in Belfast.

In a further boost for the women’s game, he also announced six home matches for Ireland Women against Bangladesh, in addition to the seven games already scheduled this summer against South Africa.

In his speech to assembled guests, Deutrom outlined the importance of club cricket to the success of the strategic plan, and announced a new scheme to help clubs grow in addition to the support currently provided by the governing body.

“The Cricket Ireland plan recognises clubs as the hub of the sport and places them at the centre of focus for grass-roots development, helping them benefit from the record number of participants at school and youth level currently enjoying the game. We are launching a club fund to assist the clubs with grants for equipment and facilities in addition to the practical support we provide already.”

The KPC Group were unveiled at the event as main team sponsor for the next three years as well as headline sponsor of the forthcoming home series against Sri Lanka and Pakistan, and the prestigious Cricket Ireland Awards.

The KPC Group are a global conglomerate with extensive and diverse business interests in India and the USA.

Dr. Kali Pradip Chaudhuri, the Chairman and Founder of the KPC Group of Companies said of the three-year sponsorship agreement: “The KPC Group are delighted to announce our eminent partnership with Cricket Ireland for the next three years. Cricket Ireland’s growing global status and vision is very impressive and we look forward to working with them on their journey to Test cricket.

“The KPC Group have followed Ireland’s progress over the last number of years and we’re looking forward to partnering with the organisation and becoming part of this great success story.

“As a world leader in the medical and other sectors, and as the KPC brand continues to grow globally, we believe there is an opportunity to work with Cricket Ireland for the benefit of both organisations on a number of initiatives. One of these initiatives is the opportunity to engage our Irish American audience and the Irish American Business Community in the USA through the Irish cricket team.

“As part of our agreement we are also eagerly anticipating the visits to Ireland by both Sri Lanka in June and Pakistan in August to play in The KPC Group ODI series and to The KPC Group Cricket Ireland Awards which will take place at the end of the season.”

The latest sponsorship boost was welcomed by Cricket Ireland Commercial Director Dennis Cousins who said: “Our new partnership with The KPC Group reflects our growing profile worldwide and our commercial appeal to global brands.

“It’s an exciting partnership for Cricket Ireland which will help us to achieve many of the objectives set out in our new Strategic Plan. Working with The KPC Group will enable us to further extend our reach and to continue to bring Irish cricket to a wider global audience.”

In further good news at the event, Irish sports company O’Neills are putting their shirts on further success for the Ireland cricket team by extending their sponsorship deal for a further four years to the end of the decade.

The Tyrone-based company has been the official kit supplier for Ireland since 2012, and their distinctive shirts were in evidence when The Boys in Green beat the West Indies at the 2015 World Cup and have been worn in three T20 World Cups.

O’Neills provide all training and playing attire for the Senior Men’s, Women’s, Development, Underage, Interprovincial squads and umpires, as well as an exciting range of high quality replica wear for both male and female supporters.

The deal which runs until the end of 2019, will also see O’Neills renewing their sponsorship of the Ulster Cup, Shield and Plate competitions.

Kieran Kennedy, Managing Director of O’Neills Sports International Ltd said: “Cricket Ireland has done a fantastic job in promoting the game throughout the country. It is an exciting time for Irish cricket, and the success of the international team speaks for itself. The game’s popularity is greater than ever and we are looking forward to continuing O’Neills partnership with Cricket Ireland for another four years.”

Cricket Ireland and O’Neills also revealed plans for an exciting new joint venture between both parties to launch a new online store where people can buy replica kit, leisure wear and cricket equipment and accessories.

“The website www.cricketshop.ie will be coming online next month, and will be the one-stop shop for all Irish cricket fans and players,” said Kennedy. “We have built our relationship with local Irish Cricket clubs at grass roots level and our new partnership with the Cricket Ireland club shop www.cricketshop.ie will mean cricket gear is more accessible and affordable to players at all levels.”

Speaking of the O’Neills four year deal, Cousins added: “O’Neills have been a true partner to Cricket Ireland and we are very grateful to Kieran Kennedy and his team for the commitment they’ve shown us from day one.

“Our new joint venture www.cricketshop.ie is a very exciting development which will cater for the growing equipment requirements of clubs, schools, and players. It will stock a range of excellent entry products that will also provide for parents who want to get their kids to give cricket a go.”

For further information on the KPC Group of Companies, you can visit their website here

To view the strategic plan in full please click here