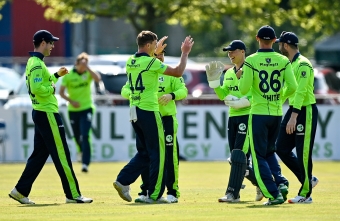 DUBLIN – Cricket Ireland has today confirmed 19 men’s central full-time contracts have been offered in 2022 – 12 of which are two-year deals.

This year will see the reintroduction of two-year contracts which were last used in 2014-15 during the lead-up to the Cricket World Cup 2015.

The centrally-contracted full-time men’s players for 2022 are:

“Central contracts are one of the key tools we have as Selectors, and decision-making around contracts is often guided on two levels of thought – firstly, to identify a group of talented players that we believe will form the core of the national team for the year ahead. Secondly, to identify a cohort of players we believe can be developed into the spine of the senior squad in the medium-to-long term.

“We have a very busy year ahead, and a T20 World Cup at the back end, but player development is also key for us when making contract decisions. Player development, however, is not a quick fix, but a longer-term investment in our players – as such, the Selectors were pleased with the opportunity to offer a number of multi-year contracts in 2022. However, these contracts should not be seen as a rite of passage for selection. While we invest in the playing pool we have, there are players within the central-contracts pool, and outside of it, who are putting pressure on existing first team players – they are just as hungry and keen to succeed.

“An obvious absence from this list is Kevin O’Brien. Kevin knows that the door is still open, and he is still on the Selectors radar. He has made it clear he has the desire to stake a claim for a recall, and we look forward to seeing him back in action at the inter-pro level come May.

“I congratulate all players receiving contracts for 2022, but encourage those outside the group to keep pushing hard. Runs and wickets are the currency, and on-field performance is key. If you perform consistently, I’d like to think that rewards will follow. I wish everyone well for the year ahead as we get into a big home season, then on to a T20 World Cup later in 2022.”

“Cricket Ireland has been investing in men’s contracts for over a decade now, however, never has there been a more crucial time for Irish cricket to have a greater strength in depth at the top level than now. With 15 home international fixtures announced this week, tours and a T20 World Cup ahead in this year alone – not to mention what we have already played in the first two months of the year – the volume and demands on our senior internationals is incredibly challenging. So, these 19 contracts announced today are seen as an investment in ensuring we have a solid squad of international-ready cricketers, and covering the skill sets we need as we play in such a varied range of conditions around the world.

“And this last point is important. In 2022, our senior men will have played in the Caribbean, Middle East, Ireland, England and Australia to name but a few locations. Each of these locations vary in conditions – some quite starkly vary – and as such, we need to ensure we have a player pool that possesses the skill-sets to succeed in these locations.

“What is most pleasing about the current squad, though, is that there is a healthy level of competition for places – and we have seen of late a number of players step into new roles and perform remarkably well – Andy McBrine in the T20I side would be an obvious example of this. As a result of competitive and motivated performances, you can see through the contracts offered that these performances bring rewards. And that should be both the way it works for current players, and a motivation for those aspiring to earn a contract in the years ahead.

“We hope that we may be in a position to offer a number of further contracts as the year progresses – with the Ireland Wolves programme and the Inter-Provincial Series being the proving ground for those seeking higher honours. But for now, we congratulate this group of 19, and hope to see them make their mark in Irish cricket in what is a big 2022.”