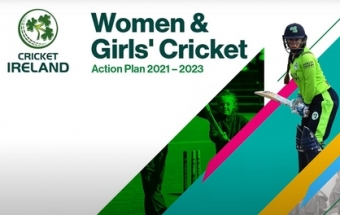 The Action Plan has been released

DUBLIN – A new three-year Action Plan has been released today by Cricket Ireland and takes a dedicated look at what is required to strengthen and grow cricket opportunities for women and girls across Ireland - with the longer-term aim of making cricket the fastest growing sport for women and girls in Ireland.

The Women & Girls’ Cricket Action Plan 2021-2023 is a more detailed companion piece to the recently released Cricket Ireland Strategic Plan 2021-2023 (titled: “Creating a Cricket Island”) which sets out a staged approach to growing the game of cricket across Ireland.

Amongst the key headlines of the Action Plan, Cricket Ireland will aim to:

• Roll out a range of new national participation and leadership programmes to attract and retain women and girls within the sport;
• Significantly increase opportunities for women and girls to play cricket by working with Provincial Unions to support more cricket clubs across Ireland in developing their capacity to deliver cricket experiences for females;
• Significantly increasing visibility of the women’s game and growing attendances at international matches;
• Invest more in the performance pathway and further support women’s international squads to seek on-field success and regular world cup qualification;
• Implement a sustained investment in women coaches and officials to increase the number and skills of those involved;
• Deliver proactive programmes that further increase diversity and inclusion – aiming to make cricket one of the most welcoming sports in Ireland; and
• Drive greater gender diversity on boards and committees in line with upcoming National Sport Policy standards.

“This is an important piece of work that will help guide what is already one of our fastest growing demographics with the sport in Ireland. For many years we have excelled at the elite side of our sport, maintaining a world ranking of 10th against some larger and more resourced rivals. We have certainly invested a great deal more in the women’s high performance programme over recent years – a 45% increase in funding over the last four years, and plan to increase this significantly further over coming years.”

“However, not all of the investment has been felt as keenly across the sport, most notably we haven’t been in the position to invest time and resources in the grassroots to the extent we would have liked. That’s what this Action Plan is about – rebalancing our priorities so we can grow and nurture a sustainable sport, and become one of the most diverse, welcoming and responsive sports for women and girls in Ireland.”

“This Action Plan makes one thing clear – the intent of Cricket Ireland is to drive growth of opportunity for girls and women to get involved in cricket across Ireland. The Plan aims to break down those more traditional stereotypes that exist around cricket and create fun and engaging experiences that will hopefully make participants want to come back for more.”

“Is a three-year plan going to do it? No, of course not. We recognise there is much to do, but this Plan is our commitment to action and take proactive steps in making cricket the fastest growing female sport in Ireland.”

“We would like to thank the many people and organisations who were involved in supporting the development of this Action Plan, most notably the Project Steering Group, our colleagues in the Provincial Unions, Maeve Buckley and the participants at our in-person sessions and online surveys. We would also like to thank Sport Ireland who provided valuable funding to support this project.” “The importance of the grassroots of any sport cannot be overstated, that is why participation is a core part of the Cricket Ireland strategic plan and I am delighted that this Action Plan for the women’s and girls game has been developed as part of the overall strategy. Having a targeted focus on key areas of the women’s game will help balance opportunity in the sport.

“We have seen the women’s game be sustained and grow at the grassroots level due to the hard work and dedication of many across Ireland, and this Action Plan will support and build on the existing systems and structures. By working in partnership with our Provincial Unions, we hope to bring a more cohesive approach to growing the game over coming years.”

“In recent weeks we have launched a number of new programmes. A key focus of these programmes – but not exclusively - is providing opportunity for girls to take part in cricket. The programmes – Smash It, It’s Wicket! and our joint partnership in schools with Chance to Shine – aim to provide an experience for young girls that will hopefully open their eyes to the opportunities of cricket as a sport of choice.”

“We have invested heavily in the women’s high performance system over recent years to increasingly professionalise the sport. Two years ago we became the second team sport in Ireland to offer playing contracts to women, and in fact, I believe we may be the only sport in Ireland right now to have maintained those contracts through the pandemic. We didn’t just maintain these contracts, we grew our retainer contracts to seven, and added 12 additional non-retainer contracts during this period. But professionalism hasn’t just been about contracts – we have significantly increased our investment in health, fitness, nutrition, physio and S&C services particularly – as well as more coaching contact hours and employed a Pathway and Performance Coach specifically for the women’s system.”

“We haven’t stopped there, and this Action Plan outlines a range of goals and activities we will be taking over coming years – including investing in leadership, growing overseas opportunities and raising the profile of the women’s performance squad as role models for our sport.”