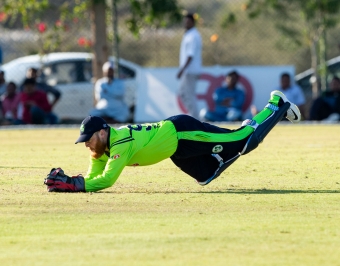 “On behalf of the coaches, players past and present, and staff at Cricket Ireland I would like to thank Stuart for his service to Irish cricket since he made his debut for Ireland in 2011. Stuart has played 60 times for the national side, his last appearance being his Test debut against Afghanistan in early 2019.”

“He has certainly been one of a cohort of players who has been part of the rapid climb of Irish cricket over the last decade from Associate Member to Full Member with Test match status, and I’m pleased for Stuart personally that he played in a Test match before he finished with international duties.”

“We wish Stuart and his family well with the next phase in their lives and hope that we see him regularly supporting the Irish team as we ourselves move into the next phase of our development.”

Stuart Poynter made his international debut for Ireland in a first-class match against Namibia in September 2011. With the gloves, he finished with 49 dismissals behind the stumps (43 catches / 6 stumpings), and with the bat he made 897 runs at an average of 20.39, including two centuries. Image: Stuart Poynter keeping in his debut Test match in 2019 Image: Stuart Poynter in action against Oman in February 2019