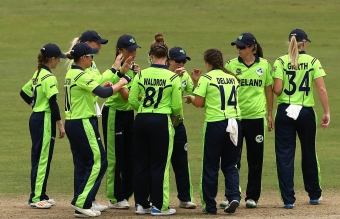 First-ever women's player contracts to be offered in 2019

DUNDALK – The Board of Cricket Ireland has endorsed the provision of Irish cricket’s first women’s senior playing contracts, after a recommendation was accepted at its recent Board Meeting held at Ballymascanlon House Hotel on 12 December 2018.

“We are delighted to become one of a very select number of sports in Ireland to offer professional contracts to women players. It has been an ambition of ours for a number of years, and we now find ourselves in the position to push ahead with this much-needed improvement to our sport.”

“The professionalism shown by our senior women’s team during preparation, qualification and performance at the recent ICC T20 World Cup was a demonstration that this side of our sport is ready to progress and grow.”

“We have been steadily increasing our investment and support for women’s cricket over recent years. This has included the appointment of a full-time national coach, providing for loss of earnings for players throughout the summer, increasing coaching staff and coach contact hours, increasing overseas player development opportunities, provision of a dedicated Academy programme for girls, and facilitating greater access to support services such as physio and medical, strength and conditioning, psychology and nutrition education. In addition, the creation of the Toyota Super 3’s Series in 2016 has provided that vital bridge between club and international cricket.”

“Like we did with the men’s side a number of years ago, we will now bring a measured approach to player contracts. A small number of part-time contracts will be offered in early 2019, with the plan to expand this programme over subsequent years.”

“Once again, we are grateful to Sport Ireland for their support in investing in this important development for Irish women’s cricket, enabling us to move into this exciting new period in our sport.” The ICC recently announced that the next iteration of the ICC International Women’s Championship, post-2021, will expand from eight to ten teams. As Ireland is currently 10th in the world rankings, the Board realises the opportunity is within Irish cricket’s grasp to cement a place when qualification comes around.

“The International Women’s Championship is an international cricket tournament used to determine qualification for the Women’s Cricket World Cup, and – like Ireland’s inclusion in the men’s Future Tours Programme – would mean that our senior women’s team will be playing some of the world’s biggest teams more regularly.”

“As was noted by many observers at the recent T20 World Cup, the standard of Irish women’s cricket has increased significantly in recent times, but so has the standard of all of the world’s top teams. We need to introduce new measures like this to remain competitive against the world’s best and to push our game forward.”

“To prepare for our potential inclusion in the Women’s Championship, it will require further investment and improvements to be made in the women’s game – and a need to call on players’ availability more regularly. When relying on players who are juggling work and study commitments, availability for international games can quite often become a challenge. We believe that offering a small number of contracts, at least initially, will begin to ensure improved playing standards and better availability of our first-choice squad members.”

The Board also wholeheartedly endorsed the funding and development of a strategy for girl’s and women’s cricket in Ireland that will look at all aspects of the game, on and off the field of play. While the announcement of initial contracts precedes the strategy’s development, it is envisioned that the strategy will provide recommended guidelines for the scope and timing of expanding the contracts process.

“With a broad brief to look at all aspects of women’s and girls’ involvement in Irish cricket – including the need to benchmark with other cricket nations/sports, and to encompass targets set by Governments and ICC – the Board agreed that the engagement of an independent, experienced consultant to develop a framework for the future of this area of our sport was essential. We will be appointing the consultant early in the new year and will begin this important project immediately afterwards,” said Mr Holdsworth.

“We are entering a new phase in women’s sport in Ireland, and cricket is no different. Around the world we see an uplift of interest, participation and standards of women’s cricket and we are gradually putting in place a system to ensure that we not only continue to compete with the top teams, but advance the sport from grass roots to international.”

Cricket Ireland also confirmed that negotiations have progressed with other Full Member nations on international women’s fixtures in Ireland in the summer of 2019. These fixtures will be announced in January 2019 and will be part of another important year for the sport, as they will precede the global qualifying tournament for the Women’s T20 World Cup in Australia in early 2020.