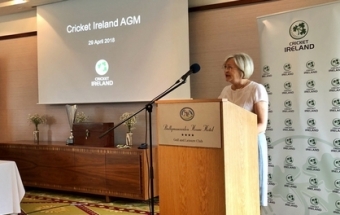 The Members of Cricket Ireland have confirmed Aideen Rice as the new President of Cricket Ireland – becoming the first woman to hold the role since the organisation (originally called the Irish Cricket Union) was established in 1923.

Ms Rice has been involved in grassroots cricket in Leinster since the 1970s - over the years re-establishing the youth set-up at the famous YMCA Cricket Club (she held the Youth Administrator role for 18 years); chairing the youth section of the Leinster Cricket Union (2005-2007); chairing the Youth & Schools section of Cricket Leinster (2010-2012); and acting as secretary of the coaches’ association for several years.

In 2012 she was recognised with the Volunteer of the Year Award at the Cricket Ireland Awards Ceremony, and in 2015 became the President of YMCA for a two-year term.

“It’s a great honour to be standing here today, but I can think of many other women who could be here instead of me,” said Ms Rice, whilst addressing the Members at the recent Annual General Meeting held at Ballymascanlon House in Dundalk.

“On both the provincial and international front, men and women, the summer is shaping up to be very busy and exciting. While I don’t want to put any pressure on our women’s team, one thing I would like nothing better would be to accompany our women’s senior team to the West Indies in November for the T20 World Cup. 2018 is a most historic year for Irish cricket with the first men’s Test Match less than two weeks away, and I’m looking forward to playing my part.”

“On behalf of the wider cricket family I welcome Aideen to the role. I am delighted with her appointment and it is a true recognition of her many years of commitment to junior cricket in Leinster. Her achievements in supporting grassroots cricket is legendary, and I know she’ll bring an equal measure of commitment to this new challenge.”

“The success of our senior women’s team – which is currently ranked 10th in the world – has helped spur interest in women’s cricket and provided new pathways for girls to get into the sport. Irish cricket’s support for the women’s game is an important part of our commitment to growing the game, and Aideen’s elevation to President is both an important recognition for her personally, and an encouragement to the next generation of women cricketers that they can breakthrough at all levels of our sport.”

“I would like to acknowledge the outgoing President, Brian Walsh, a man I have known for many years. Brian’s dedication to cricket in Ireland is beyond doubt and in the last 12 months he has travelled many miles and seen many cricket games. I know Brian will stay close to the sport for many years to come.”

Brian Walsh recounted his busy year as President and then ceremonially handed over the role to the new President:

“I would like to wish my successor Aideen Rice all the very best for what will be another very exciting year. Aideen is of course the first woman to hold the post of President and she is a very deserving nomination. During my year she was always available to support and offer advice when required and attended matches when there was a double booking. I wish her all the best and know that she will have a wonderful year.”

Ms Rice’s appointment comes just 12 days before the historic first men’s Test Match and ahead of what is shaping up to be the most significant summer of Irish cricket ever.

Tickets to the historic first Test Match are now on sale through Ticketmaster.

Photos from the occasion Image: The members of Cricket Ireland were welcomed to Ballymascanlon House in Dundalk