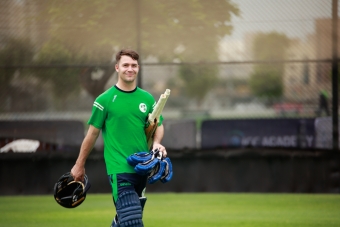 Curtis Campher heads to the nets for another practice session

DUBAI, UAE – Irish all-rounder Curtis Campher is pleased to have put his recent injury behind him, and is looking ahead to the ICC Men’s T20 World Cup – and his recently announced appearance in the upcoming Abu Dhabi T10 League.

Campher, 22, has 13 caps for Ireland since making his debut in 2020 and yesterday Campher looked the most comfortable of Ireland’s batters, top-scoring with 22 from 16 balls. However, he acknowledged the overall performance of the men in green wasn’t up to scratch and they hope to rectify that tomorrow:

“To be honest, yesterday wasn’t great with either bat or ball. We had managed to restrict them well, but let it slip towards the end - and they took the momentum into the break after some great death-overs hitting.”

“We certainly discussed our approach afterwards as a batting unit, but the nature of T20 cricket is often ‘if it’s not your day, it’s not your day’. We are obviously very disappointed with result as we thought we could have chased down that total - but losing early wickets in the powerplay brought pressure, and the wicket wasn’t the easiest to get going on. Take nothing away from the UAE though, the nature of modern-day international cricket is that the standards are high and there are so many good players out there.”

“On the whole on this tour, though, the wickets have played pretty well. It’s been a little tricky adapting from the nets to one ICC field, then to another ICC field, however, the communication flow between the coaching staff and batters has been excellent, which has made dealing with conditions a lot easier.”

Campher had an injury-plagued home season, but has now put that well behind him:

“It feels really good to be back on the park - it’s been a long summer back home involving a lot of rehab, but thankfully I’m now fully fit. I’m feeling comfortable bowling and batting, and really enjoying my cricket right now.”

This morning Cricket Ireland confirmed that Campher was one of five Irish players granted approval to feature in the Abu Dhabi T10 League next month:

“It’s a privilege and honour to have been asked to play in the T10 League – franchise cricket is definitely something I would like to get involved in more over time, but this year will be just a lovely opportunity to get out there and showcase Irish cricket, not just my own brand. It was a bit of a shock to receive the offer, as I didn’t think it would happen this year after my injury, but now I’m looking forward to getting going with the team and hopefully making an impact for team.”

“The Abu Dhabi T10 is a relatively new and fast-paced game, and I’ll have to get my head around it. I’ll be having a few chats to Stirlo and some of the more experienced lads to get a feel for what to expect, but it’s a great opportunity for me to play another form of cricket.”

Ireland Men play the third of a three-match T20I series against the UAE tomorrow with the series tied 1-1. The match will start at 9am (local time or 6am Irish time) tomorrow, with coverage via FreeSports TV in the UK and Ireland.