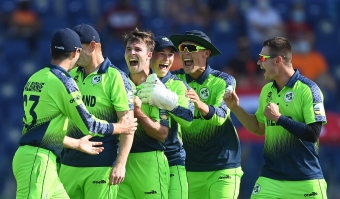 ABU DHABI - Curtis Campher made history in taking four wickets in four balls to help Ireland to a thumping seven-wicket win over the Netherlands in their first match of the 2021 ICC Men’s T20 World Cup.

The all-rounder intervened spectacularly in the 10th over of the Netherlands’ innings, reducing the opposition from 51-2 to 51-6 – the feat made him the first man to take four wickets off consecutive deliveries in a T20 World Cup fixture. Netherlands eventually finished on 106 before Paul Stirling (30*) and Gareth Delany (44) played significant hands in delivering victory with 29 balls to spare.

Pieter Seelaar won the toss and chose to bat first, but it didn’t take too long for a wicket to fall. Off the third ball of the opening over, bowled by Stirling, Ben Cooper was run out from a Simi Singh throw after a mix-up between the two batters.

Ireland then kept a lid on the run rate over the next few overs before Josh Little struck in the fifth; Bas de Leede failed to connect with a ramp shot over fine leg and was bowled by a full toss. Campher entered the fray after the Powerplay – which had cost 25 runs – and was initially expensive, conceding 12 runs from his first over.

But when he returned for his second over, the improvement was drastic. Colin Ackermann was the first to fall after a review showed that the ball, initially called a leg-side wide by the on-field umpire, had been gloved on its way to Neil Rock behind the stumps. Ryan ten Doeschate was then struck in front of the stumps by a full delivery and Campher repeated the same delivery to Scott Edwards – another review was required to show the ball was projected to hit the stumps, leaving Campher and his teammates jubilant.

But the fun didn’t stop there for Campher. Roelof van der Merwe was bowled after inside-edging a delivery onto his stumps, leaving Ireland firmly in the ascendancy. O’Dowd kept one end ticking over for the Netherlands, eventually moving to a half-century from 44 deliveries, but it then came Mark Adair’s turn to dominate proceedings.

O’Dowd hit an Adair slower ball into the hands of Harry Tector at long-on in the 17th over and the right-arm quick claimed two wickets from the final three balls of the Netherlands innings, his changes of pace making him a difficult man to hit. He finished with superb figures of 3-9 from his four overs, and his economical ways were backed up by Little, who managed 1-14 from his set of four. Hat-trick hero Campher finished with 4-26.

In the chase, Stirling and Kevin O’Brien got Ireland off to a safe start with 20 from the first three overs. While O’Brien (9) and Andrew Balbirnie (8) fell soon after in the space of seven deliveries, Stirling and Delany kicked off a fine 59-run partnership.

Despite a stunning six over third man, Stirling played the more patient role, eventually finishing unbeaten on 30 off 39 deliveries; Delany, on the other hand, continued his big-hitting ways from the warm-up win over Bangladesh, striking five fours and two sixes in his 29-ball knock before he was bowled by Seelaar.

Fittingly, Campher was on hand to hit the winning run off the first ball of the 16th over, bringing an end to a fine all-round performance by himself and his teammates.

Ireland’s next match is against Sri Lanka on Wednesday in Abu Dhabi.