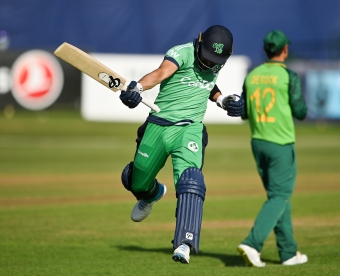 DUBLIN – Simi Singh struck an impressive maiden ODI ton, but Janneman Malan’s 177 not out led South Africa to a 70-run win over Ireland in the third and final ODI of the DafaNews Cup in Malahide.

After South Africa won the toss and chose to bat first, Malan shared a mammoth 225-run opening partnership with Quinton de Kock as the pair both hit centuries. Ireland were reduced to 92-6 after being set a tough target of 347, and although Simi Singh led a lower-order resistance with a memorable maiden international hundred, the Proteas eventually secured a 70-run win to level the series at 1-1.

De Kock, playing his first match of the series, and Malan were in control from the get-go in South Africa’s innings, bringing up their century partnership inside 19 overs. The experienced left-hander showed off his fluent stroke play while Malan carried on the form he showed in the previous ODI on Tuesday when he top-scored for the Proteas with 84.

There was little jeopardy for South Africa in the middle overs as the pair both nurdled and kept the boundaries coming, and it was de Kock who initially played the starring role: his 16th ODI century was reached off just 83 deliveries, and he refused to relent afterwards. George Dockrell bore witness to this: his third over began with a de Kock four down the ground and the former South Africa captain followed it up with back-to-back sixes. The same over saw Malan move to his second ODI century in just his seventh appearance.

Ireland’s first breakthrough arrived just moments later, however, with de Kock pulling a Singh delivery to Mark Adair on the leg-side boundary – the Northern Knights all-rounder held on and showed great awareness to make sure his feet didn’t touch the rope.

Nonetheless, Malan kept on going, moving past his own international-best of 129* and ending with the fourth-highest score by a South Africa batsman in ODIs. The Ireland bowlers did bounce back with wickets at the death – Josh Little was the pick of the attack with two scalps to his name – but South Africa finished on an imposing 346-4 as the opener batted through the 50 overs.

South Africa's opening stand is now worth more than 200.

South Africa turned to spin with the new ball and it was a move that paid off handsomely as Keshav Mahraj managed to dislodge both Andrew Balbirnie and Paul Stirling with outside edges to Malan at slip. Andy McBrine continued at No.3 after hitting 30 in the second ODI and showed early promise with consecutive fours on the off-side off Anrich Nortje. But he departed to Lizaad Williams’ first ball in ODIs to leave Ireland three down inside eight overs.

Harry Tector began the rebuild alongside Dockrell, but a promising 54-run partnership was ended when Tabraiz Shamsi had the 21-year-old out LBW. Dockrell edged behind to Andile Phehlukwayo in the next over as Ireland’s hopes of securing a series win slipped away.

But Curtis Campher and Singh refused to go down without a fight – the pair put on 104 for the seventh wicket, with Campher moving to his fourth ODI half-century just eight innings into his international career. While Campher departed for 54 in the 37th over, Singh advanced to the highest score of his international career, moving past his previous-best of 56 with a hefty thump for four to the long-on boundary off Williams. An edge flew for four to the third-man boundary from the very next ball as Singh went on the attack.

While Shamsi struck two blows in the 42nd over to leave Ireland nine down, Craig Young held on at the other end as Singh searched for three figures. The landmark was reached with a quickly-run two after a drive wide of long-off from the final ball of the 47th over, and Singh was to remain unbeaten as Young perished from the next delivery of the match.

The result means that both sides take 15 World Cup Super League points from the series.