Day One: Murtagh magic at Lord’s 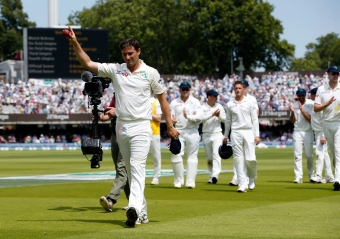 Murtagh claimed an incredible 5-13 from 9 overs

Ireland established a strong position on day one of their historic Test against England at Lord’s, bowling the hosts out for 85 before securing a lead of 122. The records broken were many. Tim Murtagh claimed the cheapest five-for in Lord’s history, England were bowled out before Lunch on day one for the first time ever in a Lord’s Test, and their innings – 23.4 overs long – was their shortest ever at the Home of Cricket.

For a moment early on, such a spectacular collapse seemed a distant possibility. Joe Root won the toss and elected to bat, and though Murtagh removed Test debutant Jason Roy early – caught at slip not long after an overstep had cut short a Mark Adair LBW shout – Rory Burns and Joe Denly looked to have blunted the worst of the new-ball threat.

The latter looked particularly settled, striking some assured drives to the cover fence, but his dismissal, pinned in front by Adair for his first Test wicket – his front foot this time safely behind the line – set in motion a slide of six wickets for seven runs, and within 75 minutes of the start, England found themselves 43-7.

Destroyer in chief was Murtagh, who ended the day with over 100 more first-class wickets at Lord’s than any other bowler this century. He utilised the helpful surface to perfection, rarely straying from a good line and length, and finding enough assistance to nick off Rory Burns and Moeen Ali, bowl Jonny Bairstow, and pin Chris Woakes LBW, the nature of the dismissals speaking to his accuracy. He finished with figures of 9-2-13-5 to his name, and a place on the Lord’s honours board deservedly won.

The prize wicket of Joe Root went to Adair, trapped plumb in front, the second of three wickets on a dream-like Test debut. With Murtagh having taken his spell, it was left to Adair and Boyd Rankin to mop up the tail, which wagged only briefly. Rankin had two excellent catches to thank for his pair of wickets, Gary Wilson’s acrobatic grab accounting for Stuart Broad after a review, and some sharp work from James McCollum at short leg ending Sam Curran’s sparky 18.

Adair dismissed Olly Stone, debutant bowling debutant after the No.10 had chiselled out 19 off 18, and just like that England were all out for 85, and Ireland headed in to enjoy their Lord’s lunch to the fullest.

After the break however, they battled like a team who knew the job was only a quarter done. The first run off the bat came from the 16th ball of the innings as William Porterfield and McCollum bedded in, and slowly the pair eased into their work.

The partnership was broken by Curran’s first ball, Porterfield mistiming a pull and offering a catch to midwicket, and McCollum played on to the same bowler not long after, but though neither passed 20, a sufficient platform had been laid, and Andy Balbirnie and Paul Stirling cashed in as the tea interval approached.

The pair looked to accelerate immediately, striking at least a single boundary in each of their first seven full overs together, and soon enough Ireland had a lead. The fifty partnership came up in just 47 balls, and an over before the break Balbirnie brought up his second Test half-century off 56 balls.

As the game entered the final session of the day however, England hit back, with five wickets falling for 17 runs. Stirling was the first to go, a review failing to overturn an LBW verdict against Stuart Broad, before Stone struck twice in an over, bowling Balbirnie with a quick delivery which swung away late, rattling Wilson with a short ball, and then nicking him off with another.

Ireland tried to rebuild, but caution proved Stuart Thompson’s downfall, the all-rounder leaving one from Broad which clipped off stump, and Adair, attempting a pull to break the shackles a ball after drinks, chopped onto Curran.

Andy McBrine scrapped through 36 balls for his 11 before Broad bowled him off the inside edge, while Murtagh swiped four fours in 10 balls to entertain the crowd. All the while, Kevin O’Brien resisted, finishing unbeaten on 28 off 73 balls as Rankin was bowled by Moeen, swinging and missing.

Ireland led by 122, and England were forced to return for one final over, but there was to be no sting in the tail, as nightwatchman opener Jack Leach played out a maiden.

A standing ovation around Lord’s for @tjmurtagh following an outstanding spell of bowling this morning!#BackingGreen  pic.twitter.com/Vm2nwcniZa