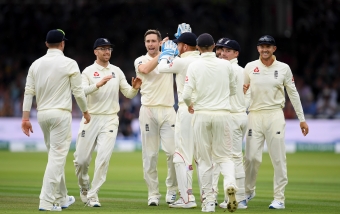 After wrapping up the England innings with the first ball of the day, Ireland succumbed to a special spell of new ball bowling from Chris Woakes and Stuart Broad on a cloudy morning under the floodlights at Lord’s.

Following a delayed start due to heavy overnight rain, Stuart Thompson got Ireland off to the perfect start, uprooting Olly Stone’s leg stump with the first delivery of the day. After England’s lower-order resurgence late on Day Two – Sam Curran and Stuart Broad added 55 runs in the last 9.5 overs of the day - Ireland would have been wary of England’s tenth-wicket partnership taking the game away from them.

That wicket meant that Thompson ended with impressive figures of 3-44 and Ireland needed 182 runs to secure their first victory in Test cricket. Conditions were markedly different to those encountered on day two. The overhead conditions and general humidity were conducive to swing bowling, as was the temperature – some 15 degrees cooler than yesterday’s peak.

Ireland’s run chase was interrupted by the rain after just seven balls with no runs on the board. After an hour off the pitch, Ireland resumed their second innings with intent. James McCollum clipped the first ball after the resumption for three through mid-wicket while skipper William Porterfield drove Chris Woakes for two more a couple of balls later.

An assured McCollum cover drive to the fence in the following oversaw Ireland reach 11-0 in the fourth over, the opening pair negotiating Woakes and Broad’s opening bursts well. Porterfield was then the first to go, falling to a fine one-handed catch by Jonny Bairstow behind the stumps off the bowling of Woakes. Then, in a manic nine-over spell, England picked up the last nine Ireland wickets for just 20 runs.

Bowling with relentless accuracy, assisted by considerable movement both in the air and off the pitch, Woakes and Broad took combined figures of 10-36. The pair attacked the stumps, and all 10 dismissals were either caught at first slip, caught by the keeper, or LBW or bowled.

The victory margin at the end of play belied the drama and entertainment of the match – despite the result, it will live long in the memories of those that were here to witness some key moments in Irish cricket.