Joyce and Porterfield put Ireland in total command in Windhoek 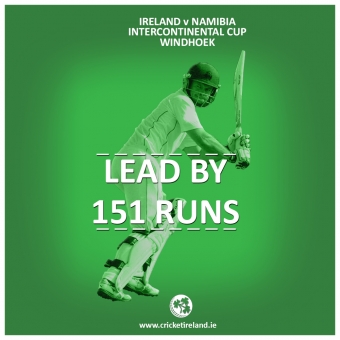 Ed Joyce and William Porterfield both scored centuries as Ireland completely dominated the second day of their InterContinental Cup clash with Namibia in Windhoek.

The pair shared a second wicket partnership of 326 in 404 balls – the second biggest in Irish history – with Joyce recording back-to-back double hundreds in the competition.

Ireland got their morning off to the perfect start with Craig Young (2-63) dismissing Chris Coombe for 34 - ending the stubborn last wicket stand of 49 with the 7th ball of the day.

Paul Stirling (15) hit three boundaries before edging Coombe behind with the total of 35, to give Namibia early hope. That hope was soon extinguished by a batting masterclass from Joyce and Porterfield.

The pair were rarely troubled throughout their massive partnership, with boundaries coming with increasing regularity.

Joyce reached his 7th hundred for Ireland from 124 balls (14 fours, 2 sixes), and accelerated taking just another 74 deliveries to reach 200 (25 fours, 6 sixes), striking one more boundary before being caught on the long-on boundary for 205.

No fewer than 140 of his 205 runs came in boundaries in an innings which will live long in the memory.

The total at that stage was 361 for 2, but as so often happens following such a lengthy partnership, Niall O’Brien perished first ball, edging Sarel Burger behind to Zane Green.

Skipper William Porterfield reached his 13th century for Ireland - another record - from 174 balls (15 fours, 1 six). He finished the day unbeaten on 153 striking many of his 17 boundaries with trademark drives through extra cover.

He and Gary Wilson (22*) have so far added for the fourth wicket to take Ireland’s first innings lead to 151.

The Irish have already secured six points by virtue of the first innings lead, and will be keen on day three to extend that lead to around 300 before a mid-afternoon declaration.