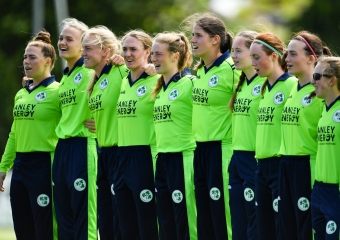 DUBLIN – Ireland Women’s captain Laura Delany is set to return to the international squad just four weeks after fracturing her ankle, as the first squad under interim Head Coach Ed Joyce is announced for the upcoming Zimbabwe series in July.

The Irish women’s team will play three 50-over matches followed by three T20 Internationals against Zimbabwe Women starting 3 July 2019. The six-match series will be the first time Zimbabwe Women have played in Ireland, with the sides having met on nine occasions since their first encounter in 2008 – Ireland having won five matches, Zimbabwe four matches.

“I’m really happy with my recovery and rehabilitation process. Having fractured my ankle in the first game against the West Indies in May, everything is on track for a speedy recovery and I’m confident that I will be back in time for the first match against Zimbabwe on 3 July.”

“Matches between Ireland and Zimbabwe are typically competitive, and while Zimbabwe are ranked slightly lower than ourselves, they are a professional outfit and have grown as a team over the last couple of years. I expect the series will be a good test to see where we are at as a squad.”

Owing to her injury, Delany had a rare opportunity to closely observe her colleagues from the sidelines during the last two matches of the West Indies series, and was encouraged by some of the performances the young squad delivered against the world’s fourth ranked side:

“To see senior players like Kim Garth and Mary Waldron - who have both worked very hard on their batting over the last 12 months - stand up and perform the way they did was very pleasing. Both registered their first T20 half-centuries against a tough attack. With the ball, Celeste Raack was brilliant throughout all three games, along with Sophie MacMahon who showed the fans what we all know she is capable of.”

“The West Indies series was always going to be a tough ask, as it was our first series as a new squad. We have been working hard since that series and are really looking forward to the contest between ourselves and Zimbabwe. We still have plenty of international fixtures, along with Super 3s games, before the qualifiers at the end of the season, so we are building up nicely towards our end goal of world cup qualification.”


* The T20I series will be doubleheaders with Ireland and Zimbabwe Men’s teams playing at the same venue on the same day.