Delany refocuses squad on clash with Pakistan on Tuesday 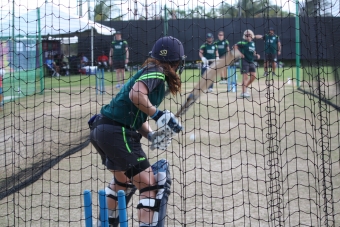 GEORGETOWN – Ireland Women’s captain Laura Delany was keen for her side to take on the learnings of their match against Australia and refocus on the next challenge against Pakistan in Guyana on Tuesday.

The squad were back at the National Stadium in Georgetown training this afternoon training beneath overcast, humid skies.

“Yesterday evening was quite a tough game for us. Going into our match we’d obviously watched the earlier games in the Group and could tell it was going to be a tough wicket to bat on. So we batted first, but didn’t put enough runs on the board and made it quite difficult for our bowlers to defend,” said Delany.

“In T20s plans change quite quickly, and last evening was probably a prime example of that. As a bowling unit we’d spoken before the game - and had done a lot of homework on the batters - but when we got out there we bowled slightly wider or a different length to what we’d said. So from my perspective it became about mixing it up with the bowlers and changing the fields to defend any way that we could.”

“Today is ‘technically’ a rest day - but not really. We had monitoring this morning, have a training session this afternoon, and a team meeting this evening. So not a huge amount of time to rest, but we are going to reset and refocus at training today.”

“This is one of the biggest tournaments you can play at in women’s cricket and there is a great standard of cricket being played. Pakistan tomorrow is certainly our biggest game in the Group Stage and we’re itching to move on from the last game and get into it.”

The clash between Ireland (world ranked 10th) and Pakistan (world ranked 7th) is set to be an evenly contested match. The sides haven’t met in the T20 arena since 2014, with Pakistan victorious in two of the last three matches between the sides, however the victory last Wednesday night over Sri Lanka showed that the Irish side won’t fear another spin-heavy team from the Asian region. Both sides have succumbed to Australia in the Group Stage so far, and will both be keen to register their first tournament victory.