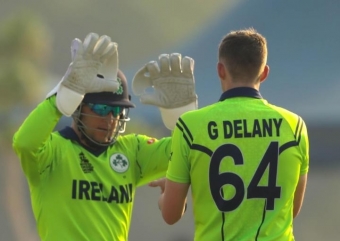 Under warm conditions, Ireland lost the toss and was sent in to bat – a decision that the Omani’s would rue. The Irish team had arrived at the ground bearing bad news, that in-form batter Andy Balbirnie had succumbed to an illness and ruled out of the game, but that would not hamper the men in green.

Ireland’s top order batters were in a positive mood, looking to make amends for the last match loss to UAE on Saturday. Paul Stirling (11) and Kevin O’Brien (41) started out by putting on 34 for the first wicket from just over four overs. During the partnership O’Brien hit a massive six over mid-wicket early, which broke a world-record for the most sixes hit by a batsman in T20 International cricket in a calendar year (35 to date), and despite losing Paul Stirling soon after for 11, Ireland’s run rate did not abate. Losing his partner O’Brien with the score on 76 in the 10th over, Delany was joined by 19-year old Harry Tector and the run rate accelerated further. Tector hit two sixes and a boundary in his innings of 28, with he and Delany sharing a quickfire 43-run stand.

Tector dismissal saw Mark Adair come to the crease, but the usually big-hitting Adair took on the support role and let Delany continue to pummel the Omani attack. The pair put on 64 runs in the last five overs, with Adair contributing 11 of those. Delany was in the zone - at one stage took 33 runs from 11 balls.

Ireland finished its 20 overs with 183-3, setting the Oman side a challenging target on a slowly wearing pitch.

A well-deserved pat on the back for Gareth Delany #IREvOMA | #T20WorldCup pic.twitter.com/p9TUwhASyC

In response, Oman were never really in the running. Despite some big hitting by opener Khawar Ali (50 from 34 balls), the Omani batters couldn’t keep pace with a steadily increasing run rate required. The Irish bowlers took wickets at regular intervals, not letting their opponents build a threatening partnership. Gareth Delany completed his ‘on-song’ day by claiming 2-29 from four overs, including the wicket of Ali.

Mark Adair again bowled well taking 2-24, and George Dockrell chimed in with 2-24. While only claiming a single scalp, the pace and bounce of Boyd Rankin was difficult for Oman to handle, and he ended with 1-20 from his four overs.

Oman finished on 148-9, with Ireland winning by 35 runs. Gareth Delany was named a very worthy Player of the Match.