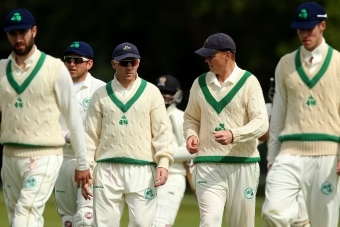 KEVIN O’BRIEN showed all his experience to keep Ireland’s slim hopes of capturing a fifth ICC InterContinental Cup alive after they slumped to 166 for 8 against Scotland in Dubai.

O’Brien, winning his 293rd cap, top scored with a defiant unbeaten 78, adding what could well be a crucial 85 for the last two wickets with Tim Murtagh and Peter Chase.

The 33 year-old all-rounder struck 6 fours and cleared the ropes three times in his 97-ball innings, scoring his 31st half-century for the Irish – his 9th in the competition.

There was no sign of the collapse to come after the Irish recovered from the early loss of Paul Stirling (9) to race to 73 for 1 in the 15th over, but skipper William Porterfield (28) and Andrew Balbirnie (36) fell in quick succession, and from then Scotland were very much in the ascendancy.

“The pitch was ok, a little bit two-paced when against the pace bowlers, there was little to no spin really,” said O’Brien at the close of play.

“Scotland bowled very well in the second hour of the first session, slowed the run-rate right down and picked up a few wickets to take into lunch.

“I just tried to play as straight as I could, picking up any scoring opportunities I felt were there. My mind-set is always the same, look to be positive and score, but that doesn’t mean trying to hit loads of 4’s and 6’s. I was trying to be positive in defence as well as scoring.

“Tim Murtagh and Peter Chase did brilliantly to add 85 for the last two wickets. It gives us a decent score, but we are well below par considering we got off to a fast start and were 73 for 1.

“If we bowl well tomorrow morning, pick up a few early wickets, it will set us up for the rest of the day.”

Scotland safely negotiated a potentially tricky period before the close, reaching 37 for 0 with George Munsey unbeaten on 23.

Meanwhile Cricket Ireland have confirmed that Niall O’Brien is to return to the squad for next week’s ODI series against Afghanistan. O’Brien returned to the UK last week for personal reasons.