Dockrell hopes to leave them in a spin 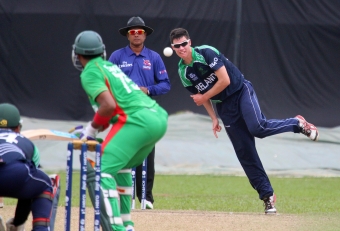 George twirls another one down © Barry Chambers/INPHO

George Dockrell is just 20 years old yet he is about to play in his third World Cup. George chatted to cricketireland.ie and told us what it was like to be a spin bowler and get ready to face up to the world’s biggest hitters.

When Twenty20 cricket first stormed onto the world scene, it was assumed that the pace bowlers would rule the roost, but it quickly became apparent that this was not the case. Spin bowlers have dominated the short form of the game in the last few year and the coming ICC World T20 will doubtless be no different.

Ireland’s premier spin bowler in all forms of the game is 20-year-old George Dockrell who made his debut for Ireland against Sri Lanka Board in Colombo on 31st January 2010 at 17 - the same city where Ireland are set to face two of the world’s heavy weights in the latest global tournament. Speaking to him in the run-up to the tournament, it quickly became clear that Dockrell is relishing the challenge.

It’s not easy chopping and changing from domestic to International cricket, let alone from four-day County Championship to International T20 cricket. “T20 is different from all other forms of the game,” agreed Dockrell. “You only get 24 balls so any one six or wicket can make or break a spell. I think you have to do a lot more thinking in T20 cricket about the batsmen and adapting to their strengths and how they are playing you. Any ball can go for a boundary so it’s mostly about adapting and hoping that luck is in your favour!”

“Mostly I try to keep my run rate  below 6 which is less than 24 runs off my four overs and wickets are usually a bonus. This has to be flexible though because in T20 a couple of edges for four can ruin a good bowling spell,” he added.

With so many things to think about from field placing to individual batsmen’s strengths and weaknesses, every ball is an event. “I try to keep things simple when I bowl,” said George. “I have a plan for the batsman and think what’s the best ball to bowl to him, but I keep an open mind in case he does something different like reverse sweeps or uses his feet.”

But Dockrell insists that there is still a place for pace bowling in the game and he thinks that one of his own teammates will stand out at the ICC World Twenty20. “Trent Johnston would have to be my choice for the best Irish bowler. His experience and knowledge of the game comes through when he bowls and is why he deserves to be in the top-10 T20 bowlers in the world.

His top picks from the other teams includes another pace bowler and two spinners. “Ashwin from India and Narine from West Indies are exceptional bowlers. Their control along with their ability to spin it both ways makes scoring off them extremely hard in T20. Also there is no substitute for raw pace in cricket so Dale Steyn would also be one to watch.”

Dockrell played his first full season for English County side Somerset this past season, so how does that match up to taking on West Indies and Australia? “The standard is obviously higher and the batsmen are better but the main difference is that in International cricket there are lots of different styles of cricket. Also, depending on where you are in the world, the pitches vary a lot.”

The shortest form of the game has gained huge popularity among fans since the inaugural ICC World Twenty20 which was held in South Africa in 2007, but most professional cricketers agree that it’s not their favourite form of the game - and Dockrell is no different. “I wouldn’t say T20 is my favourite form of the game,” he admitted. “Four-day cricket would be my favourite as it’s a better test of your bowling and your ability to get batsmen out. T20 is great fun and I love playing it but the element of luck involved takes away a certain amount of skill level.”

Success in this tournament will have nothing to do with luck, though, and Ireland have high hopes of keeping up their reputation of punching above their weight at world tournaments. “My hope would be for us to qualify through from our group and do even better than we did in England 4 years ago. Personally, I’m hoping to do as well as I did at the last ICC World Twenty20 in West Indies and help Ireland go past the group stages.”