Dockrell relishing the challenge of title-defence at T20 Festival 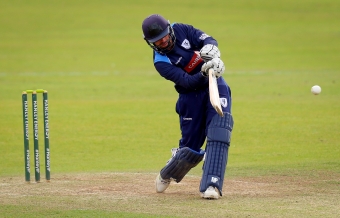 The Lightning will begin its T20 title defence this weekend

DUBLIN – T20 cricket is undoubtedly the engine that has driven world cricket over recent years, and Irish cricket fans have a treat this weekend when the first men’s Test Triangle Inter-Provincial T20 Festival gets underway at Pembroke Cricket Club.

The Test Triangle Inter-Provincial T20 festival will see four sides – Leinster Lightning, Munster Reds, North West Warriors and Northern Knights - competing against each other over three-days of high-quality action in the lead up to the international white-ball series against Zimbabwe in July. Underscoring the importance of this year’s first T20 Festival is the knowledge that 2019 is also a T20 World Cup Qualifier year, so there will be intense competition amongst players to push forward their credentials to be part of that international squad.

Speaking after the recent three-day Inter-Provincial Championship match which saw his Lightning side draw a rain-affected encounter with the Warriors, Lightning captain George Dockrell said:

“We’re very excited to have Jonesy [Nigel Jones] on board, he’s a really hard working and diligent type of guy. I really enjoyed playing cricket with him for Ireland and have heard a lot of great things about his coaching, so very excited to have him on board. We’re gutted to be losing Albie [Albert Van Der Merwe] but it’s always good to get a fresh pair of eyes and someone who sees things differently and can add value in a different way. I’m very excited to get moving with him this summer and into the future.” Image: The victorious Leinster Lightning side in 2018

The Lightning have dominated the T20 Inter-Provincial Trophy having won five of six titles since 2013. About this success, Dockrell said:

“We’ve done very well over the last few years. The skill-set we have in the team, and the fact that the guys have all played a lot of white ball and T20 cricket, hopefully means we can continue to do so.”

“We’re going into every game looking to win every match, and will take this Festival day by day. We’ve got some good clean hitters of the ball and guys with great T20 skills with the ball, and with the games coming thick and fast, we know this is just the start of a big next couple of weeks – domestically and internationally. However, this weekend at Pembroke would put the Lightning in a pretty good place to go and retain our title.”

A second three-day T20 Festival will be played in Bready in August. More information on the Test Triangle Inter-Provincial Series can be found here. The North West Warriors squad is expected to be announced later today.