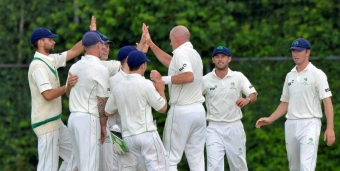 George Dockrell claimed his best bowling figures in an Irish shirt to spin Ireland to a comprehensive 279 run win against The Netherlands with a day to spare in their InterContinental Cup clash in Deventer.

The 20 year-old Somerset player took 6 for 39 on a pitch offering substantial assistance as the Dutch were skittled for 127 as they chased an unlikely 407 for victory.

An early salvo from paceman Max Sorensen (3-32) had removed the top order, allowing Dockrell to weave his magic as none of the home side were able to cope with the turn and bounce he extracted in helpful conditions.

Earlier Ireland had added a further 154 runs to their overnight 68 for 4 before skipper Kevin O’Brien declared shortly after lunch, once the lead had been passed the psychologically important 400 run barrier.

Andrew White, on his 33rd birthday, top scored with 62 as he shared partnerships of 61 with Stuart Poynter and 72 in just 88 balls with John Mooney (45).

Ireland are now guaranteed a place in the final, which is scheduled to be held in the UAE in early December.

They now switch their focus to the crucial World Cup Qualifiers against The Netherlands on Sunday and Tuesday, where two wins would seal one of the two automatic places on offer at the 2015 event in Australia and New Zealand.

The full scorecard can be found here.