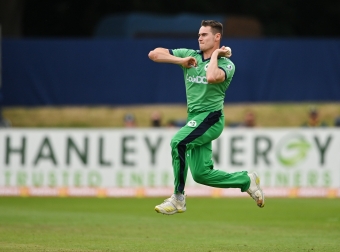 KINGSTON, Jamaica – George Dockrell hit an elegant 82 and Josh Little was at his devastating best taking 3-21, but their performances weren’t enough for Ireland to avoid slipping to defeat at the hands of the Jamaican Scorpions in a warm-up match at Sabina Park in Kingstown today.

While the run out was always going to be much more important than the result, the Irish side will be better for the competitive match today heading into a tough World Cup Super League series against the West Indies starting on Saturday.

The Men in Green had their tour schedule upended in late December by COVID-related issues leading to the cancellation of a three-match one-day series against the USA. Instead of a four-match preparation programme leading into this weekend, Ireland Men just had today’s encounter to acclimatise and work on their tactics.

After losing the toss and being asked to bat first Ireland captain Andrew Balbirnie stepped up to open alongside William Porterfield in Paul Stirling’s absence. However, his stay was short, playing on from Nicholson Gordon for 13 in the sixth over.

Porterfield looked the aggressor early, top-edging a six off Scorpions paceman Gordon Bryan, then emphatically pulling a maximum over the mid-wicket boundary two balls later. On 21, though, Porterfield looked to glide a wide ball past gully, but picked out the gully fielder perfectly to give Gordon his second wicket. Gordon followed up soon after with the wicket of Andy McBrine (6) to leave Ireland reeling with the loss of 3-6 in 11 balls.

Curtis Campher (2) became victim number four for Gordon, and Harry Tector fell for 11- Ireland was 69-5 in the 17th over staring at the prospect of being bowled out cheaply.

Lorcan Tucker and George Dockrell began to counter-attack – Tucker looking the more fluent early on, the pick of his shots being an elegant glide off his pads for four through wide mid-wicket. Looking to continue his recent good run of form with the bat – after his back-to-back half-centuries in the T20I series against the USA in December – Tucker fell for 17 nicking a wide ball while trying to guide the ball past slip.

At 100-6 it was Dockrell who then took the reins of the innings. He joined with Simi Singh in a 50-run partnership to push the score towards respectability, then partnered with Mark Adair for a 55-run stand to push the total over the 200-mark. Dockrell brought up his own half-century from 66 balls with a well-placed boundary through extra cover and looked increasingly commanding at the crease.

Singh (29), Adair (25) and McCarthy (15) gave good lower-order support, but when Gordon returned to the bowling crease he soon wrapped up the innings and claimed his 5th wicket. Ireland had recovered from 100-6 to 234 all out, but would need a disciplined bowling display to keep the home side out.

Seeking a breakthrough to mount early pressure on the Scorpions run chase, strike bowler Josh Little obliged with two special deliveries to remove both openers – the first angled in on a line from the left-armer that beat Kirk McKenzie for pace and hit the top of off, while the second slanted across Leroy Lugg catching a fine outside edge which was comfortably caught by Tucker.

While the Irish bowlers sensed an opportunity, West Indies international Brandon King (36) and Andre McCarthy (48) then combined for an 83-run third-wicket stand that not only solidified the Jamaican innings, but came at a run rate that swung the match firmly in the favour of the Caribbean side.

McBrine broke the partnership with the spectacular catch of King off his own bowling – running backwards at pace to grab a skied ball just inches from the ground, and Craig Young followed up in the next over removing McCarthy, but former West Indian captain Rovman Powell (82*) and Paul Palmer (33) then featured in a 94-run fifth-wicket stand to break the back of the run chase and all but led their side to a comfortable victory.

Little was the stand-out bowler in a losing cause finishing with 3-21 from 7 overs – his third wicket was possibly the pick of his dismissals cleaning up Palmer his a yorker that was too fast and too accurate for the batter to keep out.

Ireland Men meet West Indies Men in the first match of the World Cup Super League on Saturday at the same ground (see attached for details).