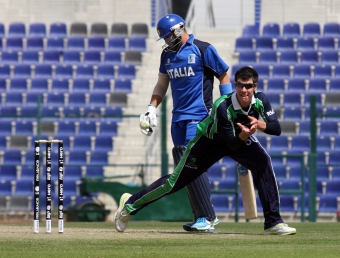 George Dockrell has crowned an impressive season for his county Somerset by being named their Young Player of the Year at the annual Somerset Awards dinnner on Friday in Taunton.

Left arm spinner George Dockrell really came of age in the county championship campaign of 2012, claiming 34 wickets at an average of 27.94 to make him the second highest Somerset wicket taker of the season.

George got his season off to a flying start, when in only his second four day game for the County he bowled Somerset to victory over Middlesex by taking six for 27.

The 20 year old claimed his second six wicket haul in the home victory over Durham six weeks later, when he took six for 29.

It wasn’t in just the longer format of the game that George flourished for the County because in the Friends Life t20, he was the leading wicket taker, with nine victims at an a cost of 18.78 and the second most economic with each of his 26 overs going for 6.50 runs.

Considering that international duties for Ireland limited George to 10 LV=Championship matches, seven FLt20 and six CB40 s for Somerset, he had a pretty impressive season in 2012.