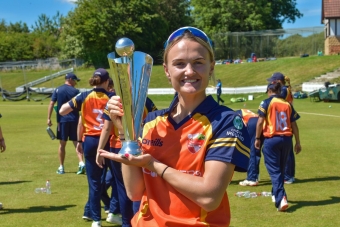 Gaby Lewis lifts the Arachas T20 Trophy for the Scorchers

WICKLOW – The Scorchers left Oak Hill on Sunday as winners of the Arachas Super 20 Trophy, once again showcasing their dominance. The Dragons completed their third win in four games as the Typhoons completed a winless campaign. The fixtures will be the last time we see the Ireland squad players in action before the beginning of the Tri-Series in Bready next weekend.

The Scorchers edged out the Typhoons by 17 runs in a run-fest on Sunday afternoon to win the Arachas Super 20 Trophy at a resplendent Oak Hill.

Both captains were happy with the outcome of the toss, which was won by the returning Gaby Lewis who opted to bat while Laura Delany was happy to give her side a crack at chasing in an attempt to reverse their Arachas Super 20 Trophy form.

The Typhoons may have quickly regretted their fate as Gaby Lewis and Bhavi Devchand put on 120 runs from 70 balls in an exceptional opening partnership that would ultimately define the game. The pair have been in great form this summer and it was no surprise that Lewis was the early aggressor, sweeping and pulling the Typhoon bowlers in the early overs as the bowlers found no assistance from the surface.

After facilitating Lewis’ early aggression by rotating the strike, Devchand began to combine traditional strokeplay with audacious risk-taking, with the ramp shop bravely deployed to maximum effect. The pair, who put on 94 last week against the Dragons, brought up their century partnership from just 57 balls.

Lewis fell in the 12th over for 76 off 46 balls to the bowling of Celeste Raack, miscuing an effort to mid on and being caught by Delany at cover. Having been on 120 at that stage, the Typhoons will have been delighted at how they came back into the game, with Ava Canning (2-27) and Jess Mayes (2-16) bowling with control which led to regular wickets.

Devchand batted deep before being well stumped by Mary Waldron for a 46-ball 68 and soon after the innings closed on 189-6.

The Typhoons came out of the blocks firing, with Rebecca Stokell scoring all around the ground during her 41-ball 57, her innings including a fierce pull through midwicket to get going before unfurling the cut, sweep and cover drive during her stay. Although Louise Little was stumped by Shauna Kavanagh for 11, Mary Waldron batted with exceptional power in a partnership of 72 that took the Typhoons to 102-2 in the 13th over.

Waldron walked across her stumps to knock the bowlers off their lines but was totally still at the point of contact. Her 36-ball stay including 6 fours and a six before she too was stumped by Shauna Kavanagh with 44 runs still required from 20 balls.

Rachael Delaney was the pick of the bowling with her off spin, but a special mention to Ellie McGee, the teenager bowling with control and tasking the Typhoons bowlers to force the pace as the asking rate climbed. The Scorchers were deserved winners in the end, not just on the day but of the Arachas Super 20 Trophy, with their talismanic leader Gaby Lewis scoring 226 runs at an average of 113 and strike rate of 178%.

Game 2: Dragons round off impressive T20 campaign with comfortable win

A superb all-round performance by wicketkeeper batter Amy Hunter steered the Dragons to a comprehensive 41-run victory over the Typhoons to the conclude the 2022 Arachas Super 20 Trophy.

The Ireland International has been in fine form since returning to cricket following her school exams, and completed four stumpings, a superb leg-side catch and scored 69 off 47 balls, including 8 fours and two huge sixes.

After choosing to bat first, the Dragons – who made four changes from the side that beat the Scorchers on Friday – once again started strongly.

As has been the case with the Scorchers, the Dragons’ opening partnerships have been a hallmark of their displays throughout the campaign and Sunday was no different as captain Leah Paul and Hunter put on 95 off 57 balls.

Hunter batted fearlessly, advancing down the pitch to the spinners and being severe on anything too short, before reaching her fifty off just 28 balls. At this stage Paul hadn’t even reached 20, but rotated the strike at will, highlighting the challenge this unconventional left-right hand pair pose to bowlers.

Paul (23) would fall to the impressive Lara McBride, outside edging a drive to Freya Sargent at point. Sarah Forbes (26 off 25) would ensure there would no loss of momentum, before McBride claimed Hunter’s wicket en route to 2-28 from her four overs. Naomi Matthews (19* off 8) added valuable runs in the final overs as the Dragons finished on 177.

After losing Rebecca Stokell for 10, LBW to an Arlene Kelly toe-crusher, Mary Waldron rounded off a strong performance on the day, supplementing her fifty in the first game with a beautifully compiled 44 off 28 balls.

Waldron and Louise Little (21) added 51 for the second wicket, but Little would fall run to a flat throw from Sarah Forbes to make it 65-2 just as the pair were beginning to up the ante.

The Paul-Hunter partnership were soon at it again, this time Paul enticing Waldron out of her crease to one that gripped and beat the outside edge before Hunter swiftly dislodged the bails to complete the first of four stumpings. In between times Laura Delany, who has been in fine form since returning from injury, was brilliantly caught down the legside to a reflex catch after a Delany paddle sweep that looked to have come off the middle of the bat.

From then on, the outcome of the game wasn’t in doubt, with Paul (2-16) and Cara Murray (2-31) ensuring there was to be no way back for the Typhoons. The match culminates a tough T20 campaign for the Typhoons, who will be hoping to find form when the 50 over competition restarts at the end of the month.

Having won three out of four games played, and having beaten the Scorchers on Friday, the Dragons will count themselves unfortunate to finish competition runners up, as the northern based side have performed admirably under the stewardship of Leah Paul.