Dr Murray Power to be honoured at Cricket Ireland Awards 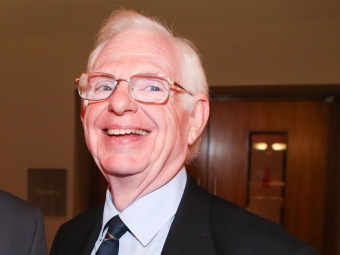 Dr Murray Power to be honoured at Cricket Ireland Awards

Dr Murray Power will be recognised with a Special Award - Outstanding Contribution and Service to Irish Cricket, in honour of John Wright - at the 2018 Turkish Airlines Cricket Ireland Awards on Friday 2 November 2018.

“Dr Murray Power has for many years now made an outstanding contribution to Irish Cricket, and particularly to cricket in Northern Ireland.”

“A former Chairman of the Irish Cricket Union and former President of Cricket Ireland, Murray serves with distinction as the Cricket Ireland Company Secretary, a member of the Finance Committee as well as helping to guide the transition of disciplinary procedures in the sport. He also led the successful process that saw the old Irish Cricket Union’s incorporation process to become a limited company.”

“But for many, it is his tireless and long-term commitment to the game at a grass-roots level that is most noteworthy.”

“In addition, he commits much of his time to Ulster and Irish Universities cricket throughout the year with an important role in supporting the organisation of the Irish Universities indoor and outdoor annual competitions. His drive to ensure these competitions continue to be delivered throughout Ireland ensures that a valuable part of the cricket participation structures remains integral to the life of university students.”

“Within the Northern Cricket Union, Murray is the registered Company Secretary, and similar to his work at Cricket Ireland-level, he played an instrumental role in the Union’s incorporation process to become a limited company as well as the Union securing Charitable Status which sees many benefits for the Union’s operations now too. His governance expertise has meant he has been a valuable volunteer when it comes to ensuring compliance with legislation for company law as well as charity law.”

“If that wasn’t enough, Murray can regularly be seen officiating at many cricket matches throughout the season as a scorer for provincial school and club events, Provincial events as well as international matches, when required.”

“Murray’s contribution continues to grow and his passion for cricket is clearly still evident even after so many years involved in the game and we are delighted to be able to recognise this on Friday.”

The full nominees list for Awards is as follows:

The evening will also see a number of Special Awards given to:
*  Clear Currency Contribution to Irish Coaching
*  Tildenet Emerging Club of the Year
*  Cricket Writers of Ireland Hall of Fame Award