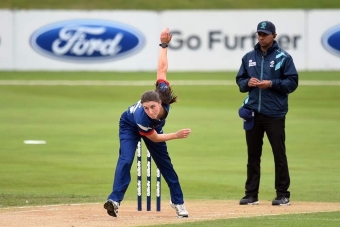 DUBLIN – New Zealander Arlene Kelly has arrived in Ireland this week as an overseas player for the Dragons in the 2022 Arachas Super Series.

28-year old all-rounder Kelly has played 68 times for the Auckland Hearts over the last 10 years, and also played in England for Kent Women in 2018.

She recently registered her highest score of 41 for her Auckland side, while with the ball she’s taken 60 wickets with a best bowling of 4-28 against Central Hinds in 2020.

Kelly, who will play for Malahide Cricket Club during her time in Ireland, is looking forward to linking up with new Dragons head coach James Cameron-Dow and her team-mates as they look to win their first game of the Super Series 50 Cup when they face the Typhoons in Lisburn this Sunday May 15 at 10.45am.

“Playing cricket here has always been something I’ve wanted to do, but it wasn’t until a conversation with Eimear Richardson helped me realise that this would be a possibility. When I realised that I could play the sport I love, in a country I love, there was no hesitation. I’m very lucky to have family living here in Cavan, and ever since my first visit I absolutely fell in love with both the people and the place.

“The recent investment that Cricket Ireland has made to the women’s game has also been fantastic to see. It’s an exciting time to be involved and I’d love the opportunity to contribute both on and off the field. It’s a fantastic opportunity and I’m really looking forward to getting involved, learning new skills and being able to share some of my knowledge.

“I can’t speak highly enough of the welcome I’ve received so far; everyone has been absolutely incredible. Hopefully, the jet lag stays away too.”

What is she hoping to bring to the Dragons:

“I think the key for me will be to stick to my processes and control what I can. Hopefully, this will allow me to make strong contributions with the bat and ball.

“I know the Dragons have an extremely talented bunch of players and were involved in a thriller last weekend. I’ve kept an eye on the Super Series over the past couple of seasons and it’s been fantastic to see the game grow and I’m really looking forward to being involved this summer.”