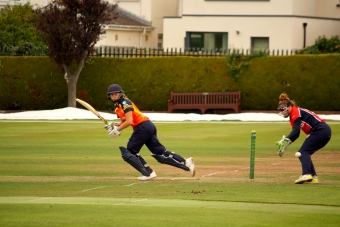 Kim Garth plays the ball away in her innings of 45

The Dragons have completed a series victory for the second time in three years despite the final match of the Toyota Super 3s being abandoned after the first innings at Clontarf Cricket Club today.

While rain delayed the start of the match and reduced the game to a 40-over a side affair, once underway both sides demonstrated why they have been the best two sides over the past four seasons with some high quality women’s cricket on display.

Unfortunately for the fans present a persistent, misty rain settled in at the conclusion of the Scorchers innings and the match was eventually abandoned.

A number of players in today’s match will complete their club cricket seasons tomorrow, and then the 16 players selected for the Women’s World T20 training squad will begin intensive preparations for the November tournament.