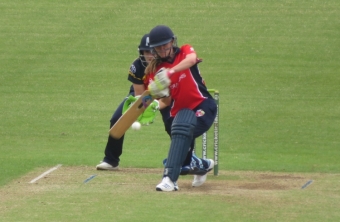 The Dragons rolled on with two more wins

OAK HILL, Wicklow - The Dragons made it five from five so far this season as they continued to dominate the Toyota Super 3s - a Series victory this year would be the first time a team has defended its crown.

It took a brilliant 66 not out from Clare Shillington and a helping hand from Mary Waldron, who posted 36 not out to see the Dragons over the line by 8 wickets with five balls to spare in the opening T20 of the Tripleheader.

Captain Waldron had elected to bowl first on a green but firm deck out in Oak Hill. Her decision was immediately vindicated. A mix up between the openers left Naomi Matthews stranded early on before Una Raymond-Hoey nicked behind from a good ball from Lara Maritz. The early bowling was tight and opportunities to score runs were few and far between as Leah Paul and Orla Prendergast looked to regroup.

They did so to good effect as they brought the score from 3-2 to 40-2 in the 8th over. However, Prendergast then fell, edging behind off Rachael Delaney for 11. Amy Hunter joined Paul, who was growing in confidence as her innings continued on. Accumulation gave way to a couple of boundaries, as her aggressive running style between the wickets was putting the Dragons’ fielders under pressure. Hunter played a good foil to her partner, however, she fell when attempting one quick single too many, Lara Maritz with a brilliant direct hit from cover.

Niamh Walsh joined Paul and accompanied her to her 50, which came up off 46 deliveries and included three fours. Paul fell soon after when trying to push the score along in the closing overs, departing for a very well compiled 56. Walsh had one final push in the last couple of overs, taking herself to 22 not out and her side to 134-6 from their 20 overs. It was a solid effort and a very good one considering the early trouble they were in.

Kerry Tomlinson and Mary Waldron opened the batting in the response and Tomlinson made sure it was a very positive start. She survived an early chance before cashing in with boundaries from strong sweep and pull shots. Waldron dealt in singles to start but opened her shoulders to hit a beautiful one bounce four straight back over the bowler’s head. They had brought the side to 45-0 in the 7th over when Tomlinson fell, edging behind to Amy Hunter off the bowling of Cassie Stephens.

Rachael Delaney soon followed when she was adjudged caught behind off Orla Prendergast soon after. This brought Shillington to the crease and her partnership with Waldron would prove to be the decisive one. Shillington also started watchfully but was soon into stride. She hit trademark shots when powering a couple of boundaries away over mid-on. The rate was climbing though and it needed a few big shots to break the shackles.

With five overs to go, Shillington decided this was her time to hit out, taking an over for 20 runs as she broke the back of the run chase, bringing up her half-century in the process. Her and Waldron saw their side home for an 8 wicket win with five balls to spare, the win being brought up with a Waldron boundary. She finished on 36* with Shillington hitting a brilliant 66*.

An excellent 51 not out from Rachael Delaney guided the Dragons home by five wickets with just one ball remaining in the second T20 of the day out in Oak Hill.

Mary Waldron had again chosen to bowl first. However, this time the rewards didn’t come as quickly as the first game. Caoimhe McCann and Cecelia Joyce opened for the Scorchers, and they started very positively and full on intent. McCann was superb, needing no second invitation to go on the sweep at any chance. Joyce showed all her class and experience at the other end, running hard and piercing gaps as the scoreboard continued to tick along.

It took a brilliant catch from Delaney to break the partnership, her good take at mid-wicket accounted for Joyce on 28. McCann kept up her good work to pass fifty while Shauna Kavanagh rotated well at the other end, ensuring that the runs flew past 100 and towards a very competitive total. Kavanagh and Sophie MacMahon both fell in the last over chasing vital runs, as their side finished on 151-3 from their 20 overs. McCann finishing with a quite brilliant 78*.

The Scorchers then struck early and removed Waldron with the first ball of the reply. This didn’t phase Delaney or Kerry Tomlinson though, as she continued on from where she left off in the first game. Her fluent game was a joy to behold as she quickly made sure that the run rate was always just about in touch. However, Tomlinson fell for 44 when being trapped in front by Cara Murray.

This brought the key wicket of Clare Shillington to the crease and despite the rate creeping up to nine an over, Shillington quickly controlled the situation. Her power down the ground is phenomenal and she showed this in her quickfire 37. When she departed caught-and-bowled off Murray, the Dragons still needed 20 from the last two overs. This quickly became 14 through six penalty runs being awarded for slow over rate. Delaney managed to steer them home with one ball remaining, when an inside edge trickled down to the fine leg boundary to secure the win. An excellent partnership between Orla Prendergast and Naomi Matthews helped the Typhoons secure a fairly comprehensive six-wicket win over the Scorchers, chasing down the target of 111 with three-and-a-half overs to spare.

The final game of the day between the Scorchers and the Typhoons was played under brilliant setting sun. Shauna Kavanagh won the toss and elected to bat.

However, it wasn’t as good a start as it was in the first game for the Scorchers. They lost McCann to the bowling of Raack, before Prendergast struck to dismiss both Cecelia Joyce and Shauna Kavanagh in the same over. It left the Scorchers 18-3 at the end of the powerplay and they needed to rebuild to have any chance of posting a big score. Sophie MacMahon and Tess Maritz did exactly that.

They put on 36 for the fourth wicket before Maritz departed for 19 off the bowling of Niamh Walsh. This brought Sarah Forbes, to join MacMahon, who was beginning to accelerate. MacMahon scored a very well compiled 42 before she fell trying to up the run rate, holing out to long-on with three overs remaining. Forbes who was joined by Cara Murray squeezed another 20 runs out of the last three overs as the Scorchers got to 111-5 from their 20 overs.

Hannah Little once again struck with the first ball of the innings as Leah Paul departed caught behind. When Little struck again to remove her sister, Louise, the Typhoons were 16-2. Raymond-Hoey was striking the ball very well and quickly got to 20 but she too fell to Little, who bowled brilliantly in her opening spell. Prendergast was then joined by Naomi Matthews, and these two batted well together to bring the Typhoons back into the driving seat.

Both of them hit good boundaries, Prendergast pulling back to back boundaries, while Matthews played a very good role in rotating alongside her, as the two built a match-winning partnership. Both of them continued to accelerate and all but brought their side home. It was Prendergast who fell ten runs short of the target, when chipping to point off MacMahon for 42.

Naomi Matthews saw it through to the end though, finishing on 34* while joined by Amy Hunter who finished with 3*. The Typhoons winning the game by six wickets.