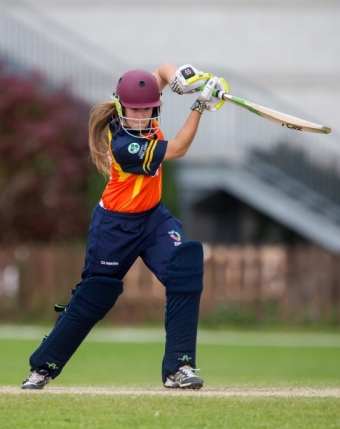 The Dragons would have looked to consolidate their league position, after coming out on top in the 50 over period of the series. However, there was a win apiece for all teams in the first day of the Super 3 T20 competition in Observatory Lane on the 16th July. This keeps the competition up for grabs when all teams play in the final T20 day in August.

There was a dramatic finish to the first game of the day, when the Scorchers beat the Typhoons by one run in a super over, after the teams were tied after 20 overs.

After being put in by the Scorchers, the Typhoons made 136/3 in their innings. Clare Shillington held her bat, top scoring with 67*(58) with ten 4s. She was well supported by Eimer Richardson, who made 28*(33). Orla Prendergast kept the bowling tight for the Dragons, who took 2-16 from her 4 overs.

The Scorchers were able to defend their total in a close fought super over, winning by the narrowest of margins. They made 9/0 from their over, with Isobel Joyce making 5*, and Hannah de Berg White scoring 4*. In reply, the Typhoons fell narrowly short, making 8/1 in their effort, with Clare Shillington contributing 5 runs. It was the perfect start to the bumper day of women’s cricket at Leinster CC.

The Typhoons took encouragement from that game, and were able to register their first win of the 2016 Super 3s campaign against the high flying Dragons, in game 2 of the day. Eimer Richardson continued her momentum from the first game, who top scored with 44(29) from the middle order, which included four 4s and a 6. Clare Shillington gave the Typhoons a stable platform to build on, scoring 37(27) with six boundaries. Rachel Delaney was the pick of the bowlers for the Dragons, taking 2-20 from 3 overs. The Typhoons in the end made 122/8 from their 20 overs.

The Dragon’s innings began well, with Cecelia Joyce the highest run scorer for them She made 38(26) ret. not out. She was ably helped with contributions from Shauna Kavanagh’s 19(31) and Jenny Gray’s 11(10). But in a bid to get to the total, the Dragons had a lower order collapse of 6-11, to give the Typhoons that all elusive win on the table. Vanessa Kelada and Leah Paul came up trumps for the Typhoons. Their 2-14 and 2-19 respectively kept the Dragons to 112/8 from their 20 overs. The Typhoons won by 10 runs.

In the final game of the day, the Dragons needed the win to keep their title hopes alive against the Scorchers. The Scorchers won the toss, and decided to have a bat. Una Raymond-Hoey made 57*(63) with four boundaries and brought the Scorcher’s total to 115/3 from their 20 overs. Gaby Lewis was the only wicket taker for the Dragons. She took 1-16 form her 4 overs, while the other two wickets were run outs of Hannah Grieve (24) and Hannah de Berg White (1). In reply, Good starts by Cecelia Joyce (28), Gaby Lewis (11) and Shauna Kavanagh (11) kept the innings progressing for the Dragons. But it was Jenny Gray’s 42*(47) that brought them home, with Mary Waldron (9) scoring the winning run off the final ball. The Dragons successfully chased down 116, and won by 7 wickets. Kim Garth was the pick of the bowlers for the Scorchers, with figures of 2-10 from for 4 overs.

Thank you to Leinster CC, especially the ground staff at the club, who provided Observatory Lane for the 3 games in a single day for the Super 3 competition. The final round of T20 games in the Super 3 will be in August, and shall be announced shortly.

Scorchers won by 1 run after Super Over.