Dragons top the table after opening round of Toyota Super 3s 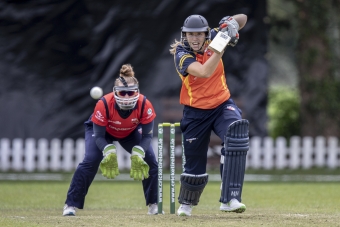 Rebecca Stokell hits out against the Dragons

The Dragons, the defending champions, got off to a positive start in the Toyota Super 3s for the new season with two solid wins as part of a T20 tripleheader which opened the 2019 campaign.

The first match of the day saw the Scorchers captain Shauna Kavanagh win the toss and send the Dragons in to bat first. Kavanagh, and her opposite number Kim Garth, were playing their first matches in their respective teams after an off-season exchange of teams.

After losing Mary Waldron, bowled by Lucy O’Reilly on the third ball of the innings, Garth (22) and Kerry Tomlinson (13) calmed early nerves and put on a 39-run stand for the second wicket. Garth’s innings included four boundaries and looked promising captain’s knock until she was dismissed by Hannah Little.

Player/Coach Clare Shillington, the retired Irish international, added 14 runs in the middle overs, but regular wickets fell led by Little (2-20) and Cara Murray (2-14) from four overs respectively. The Dragons ended up 109-9 from their 20 overs.

The Scorchers response got off to a solid start, finding themselves at 41-1 in the 9th over primarily led by a solid opening stand between Rebecca Stokell (25) and Gaby Lewis (12). However the fall of Stokell, captain Kavanagh (6) restricted the scoring and in the 11th over the Scorchers were 52-3, still needing 58 runs from 56 balls.

After a brief partnership between Caoimhe McCann (13) and Sophie MacMahon (15), six wickets then fell for 16 runs, and the Scorchers were eventually dismissed for 92.

Chief destroyer was international Lara Maritz, who claimed 3-9 from 4 overs, aided by two wickets apiece by Rachel Delaney and Ava Canning, with the miserly Garth taking 1-7 from four overs. Image: The Typhoons recorded a solid victory over the Scorchers

The second match of the day saw the Typhoons under the captaincy of national skipper Laura Delany face the Scorchers, seeking to bounce back from their initial loss.

After reaching 31-2, with Hannah Little (2-20) claiming both early wickets, the Typhoons’ Una Raymond-Hoey (39*) and Delany (34) put on what was to be an important 65-run stand for the third wicket. The captains near run-a-ball innings included five boundaries, but her innings was brought to an end from Lucy O’Reilly’s bowling.

While a further three wickets fell in the late overs, Raymond-Hoey carried her bat through the innings and the Typhoons posted 116-6 from their 20 overs.

Good early bowling from the Typhoons attack, led by Celeste Raack (1-17) and Niamh Walsh (2-10), reduced the Scorchers to 36-4. For the batting side, only Sophie MacMahon (38 runs from 32 balls) seemed to dominate, before Typhoons’ skipper Delany introduced herself into the attack and claimed 3-15 to end any resistance. The Scorchers ended on 95-8 from their 20 overs. The last match of the day saw the Dragons bat first after winning the toss, with both teams looking to finish the day undefeated.

An opening stand of 49 by Mary Waldron (48) and Kerry Tomlinson (14), followed on by a 58-run stand by Waldron and captain Kim Garth (26) saw the Dragons heading to a competitive total, but a loss of three wickets in the space of eight runs restrained the final flourish and the Dragons finished on 112-4 from 20 overs.

While a further three wickets fell in the late overs, Raymond-Hoey carried her bat through the innings and the Typhoons posted 116-6 from their 20 overs. Celeste Raack’s 2-17 provided important interventions removing Waldron and the ever-threatening Clare Shillington (5).

With 113 the target, the Typhoons must have felt they were in with a shout at 52-2, but the loss of Delany for 3 was the start of a minor collapse of 3-10, and the Dragons bowlers dominated from then on, with the Typhoons getting to 88-6 from 20 overs. Kim Garth’s 2-15 and Jane Maguire’s 2-10 were important contributions, while Anna Kerrison’s miserly 1-14 from 4 overs helped restrict the scoring rate.