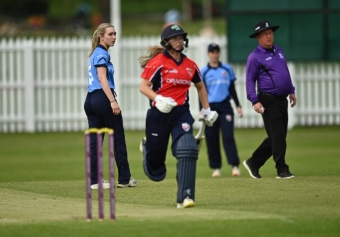 LISBURN – A confident all-round batting and bowling display by the Dragons – led by debutant Arlene Kelly – saw the team in red record their first win of the season over the Typhoons in the Arachas Super 50 Cup today at Lisburn Cricket Club.

With Typhoons captain Laura Delany resting as she recovers from an injury, stand-in skipper Rebecca Stokell won the toss and sent the Dragons in to bat under cloudy, but dry conditions.

The Dragons opening partnership of Leah Paul (42) and Sarah Forbes (67) started with intent, scoring at a rate of 5 an over in the first powerplay. Their opening stand of 75 came from just 15 overs to lay a sold platform, but the introduction of off-spinners Freya Sargent and South African Robyn Searle – making her Super Series debut - saw three wickets fall in quick succession. Searle’s wicket was particularly skilful, grabbing a high return catch above her head to dismiss Orla Prendergast (7).

With the Typhoons looking to have wrestled back control of the match, the Dragons’ Forbes and debutant Arlene Kelly began to mount a counter-attack. While Forbes anchored the innings bringing up her half-century from 78 balls, Kelly took the aggressor role and powered seven boundaries to bring up her half-century shortly after Forbes. The pair looked comfortable on a pitch lacking pace, but in the 39th over – just after bringing up their 100 partnership – Ava Canning had both Forbes and Kelly caught off consecutive balls. Forbes’ 67 was her second-highest Super Series score after her 73 against Scorchers at Rush last year, while New Zealander Kelly looked impressive for her first half-century at this level – passing her previous best of 41 for Auckland Women.

With more than 10 overs left and on 194-5, the Dragons were looking to continue the momentum through the latter overs. Amy Caulfield (30*) and Cara Murray (19) added 39 for the sixth wicket – Caulfield playing several flashing shots through the offside, while Murray taking the aerial route down the ground, as the Dragons scored a run-a-ball over the last ten to finish on 258-7 from their 50 overs. Image: Sarah Forbes on the way to 67

With a few drops of rain during the lunch break, the second innings began under much cooler conditions. The Typhoons openers, Stokell and Searle, looked to take a cautious approach to the early overs, dealing with the pace threat of Prendergast and the swing of Kate McEvoy. And it was McEvoy who struck first, with Stokell reaching for a wide ball and toe-ending the ball to Prendergast in the covers.

Searle was joined by Louise Little and the pair put on 45 for the second wicket. The South African all-rounder timed the ball well, stroking three boundaries, before unluckily chopping on a ball from Alana Dalzell.

Mary Waldron then strode to the crease and immediately took control of the innings. The experienced Irish international hit two maximums and four boundaries in a 41-ball cameo of 43 – dominating a 53-run third wicket stand with Little. However, shortly after striking her second six, Waldron played back to a ball from Paul that skidded on and was trapped in front.

Little’s patient knock came to an end on 30 playing around a well-pitched up leg-spinner from Murray, and the Typhoons saw the run rate require head above a run-a-ball with 20 overs left.

With temperatures dropping, accompanied by a cool breeze across the ground, Georgina Dempsey tried to inject some heat into the run chase with positive stroke-making and taking on the fielders – however, her 29 was not enough to drag her side into contention in the final overs. It was down to the regular loss of wickets that didn’t allow the Typhoons to build any momentum, and the side in blue were eventually bowled out for 194 – giving the Dragons their first win of the competition after their near-miss one-run loss last weekend.

For the Dragons, Player of the Match Kelly followed up her 60 with the bat with three wickets (3-35) and captain Paul claimed 3-44.

The Arachas Super Series continues with the next match between the Scorchers and Typhoons at Oak Hill next Sunday.

Hear an interview with Player of the Match, Arlene Kelly: