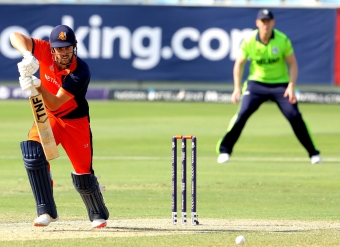 Ben Cooper batting the Netherlands out of early trouble

DUBAI, UAE – The Ireland Men’s cricket team has been beaten by a slick Netherlands side and will now play in the 3rd Place Play Off at the ICC T20 World Cup Qualifier tournament.

Ireland captain Gary Wilson won the toss and chose to bowl first - and would have been delighted with the start that the Irish bowlers came up with. Mark Adair (0-31) and Boyd Rankin (1-17) bowled probing opening overs, not letting the Dutch batters get any momentum through the powerplay. Craig Young (2-39) was then brought into the attack in the fourth over and immediately struck, with Harry Tector hanging on to a tough chance at point to dismiss Max O’Dowd (14). Young quickly followed up to bowl Colin Ackermann, which left the Netherlands 32-2 at the end of six overs.

Those wickets, however, brought the experienced Ryan ten Doeschate and Roelof van der Merwe together – the pair piling on the runs with a 56-run unbroken partnership from the last 30 balls. The Dutch side finished on 158-4, which most experts considered 15-20 runs above par score. Ireland needed a good start to their response and they got it from Paul Stirling (29) and Kevin O’Brien (22). The pair let loose in the opening overs, making yet another half-century stand – this one in just over six overs. However, the shift in the momentum of the game once again came from van der Merwe who, bowling in tandem with Seelaar, brought the Netherlands right back into the game by removing O’Brien and Stirling in quick succession.

Gareth Delany and Andy Balbirnie tried to consolidate with a 27-run stand, but with the loss of Delany with the score on 84, Ireland’s middle-order collapsed. In all, seven wickets fell for 24 runs and Ireland found themselves out of contention to make the final.

George Dockrell (25*) and Boyd Rankin (8*) put some respectability into the final total, but after 20 overs the Netherlands were victors by 21 runs.

Ireland will finish their tournament commitments in a 3rd Place Play Off at 10.10am tomorrow morning against the loser of this afternoon’s Papua New Guinea v Namibia encounter.

“Having won the toss, we were disappointed for them to score 160. They have a lot of experience in their middle order with Ryan ten Doeschate, Colin Ackermann and Roelof van der Merwe. We have a lot of talent in our squad but we perhaps don’t quite have the same level of experience as that and I thought they were excellent in the middle overs. Looking back on it now, they may have got 20 too many - 140 would have been a good chase.”

“Playing in the heat has been very tough, we’ve been out here for five weeks now so we’ve got a bit more used to it but it is still hard enough.”