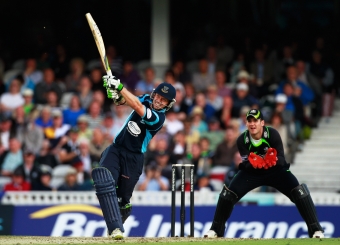 Ed Joyce will be captain in 2013 at Hove © Getty Images

Sussex County Cricket Club have confirmed their captaincy roles for next season, with Ed Joyce appointed as Club Captain, alongside Chris Nash as his vice-captain.

Joyce, 34, took over the captaincy at The PROBIZ County Ground, Hove midway through the 2012 season as Michael Yardy stood down from the position in LV=County Championship and Clydesdale Bank 40 cricket, leading the side in four LV=CC matches and five CB40 games. During that period, he guided the Sharks to a semi-final in the CB40 competition whilst also sealing a fourth-placed finish in the Championship.

With Joyce’s commitment to playing international cricket for Ireland, 29 year-old Nash will become vice-captain of the County.

Joyce said of his appointment, “It is a great honour and privilege for me to be given the chance to captain Sussex in 2013. I hugely enjoyed doing the job for the last few months of the 2012 season and, having gone close this year, I feel very strongly we can bring some silverware back to Hove next year.

“With Murray Goodwin moving on and Rory Hamilton-Brown re-signing, the team will be slightly in transition next year. But it should also be a very exciting time for the club with a younger side and perhaps some more opportunities for the younger members of the squad to show what they can do. I’m really looking forward to helping these guys develop, along with Chris Nash as vice-captain and Mark Robinson and the coaching team. We will all be working as hard as possible to try and bring as much success as Yards has had in his time as captain.”

Sussex’s Professional Cricket Manager Mark Robinson said, “We are delighted to announce as Ed as captain next year and Chris as vice-captain. Ed stepped in to Michael’s shoes seamlessly last season and formed a strong alliance with Nashy. They both bring a wealth of experience and knowledge and I am excited at working with them for the good of Sussex Cricket”.

New vice-captain Chris Nash, added “Myself and Ed have formed a strong partnership over the last few years and I look forward to working with him to continue the success that Sussex has achieved on the field in the future. We will work together to continue the good work and strong foundations that Mike Yardy put in place over a very successful period as captain.”