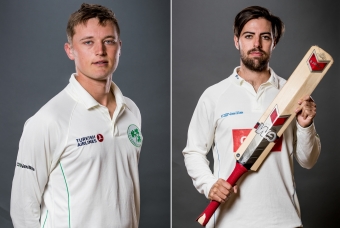 Ed Joyce, one of Ireland’s best ever cricketers who retired from the game in May this year, has announced Tyrone Kane and Jack Tector as the inaugural recipients of the Ed Joyce Scholarship Programme (EJSP) – a programme Ed launched for young players to develop their skills overseas in the winter, as he did early in his career.

Speaking as part of the announcement, Ed said:

“I am delighted with the response to the scholarship and the number of high-quality applicants that applied. I’d like nothing more than to support as many young cricketers to develop their game as possible, and fortunately we are able to start with two players in our inaugural year.”

“One of the best aspects of the process to date is seeing the initiative that many young players have demonstrated in wanting to further their cricket careers. It clearly shows that the sport has a very bright future in this country.”

“I’m pleased to confirm that Jack Tector and Tyrone Kane are the first two beneficiaries of the scholarship. Both Jack and Tyrone are part of the Shapoorji Pallonji Cricket Ireland Academy and represent what I would look for in the next generation of internationals – a passion for the game, a hunger to learn and an ambition to forge a career in cricket.”

“Jack is a natural on-field leader and exciting top-order batting prospect. He captains the Munster Reds in the Inter-Provincial competition and has captained national under-age teams for several years now. He is no doubt on the selectors radar for higher honours over coming seasons, but I believe this opportunity will provide him a means of reaching his goals in the international arena.”

“Tyrone, of course, needs no introduction to Irish fans as he was part of the historic first Test team for Ireland in May this year. A consistent performer on the domestic scene, I believe this experience will provide him with a more rounded development path that can not only benefit himself but also the Irish set up over years to come.”

“One of the challenges Irish cricket faces now is that we can no longer use English county cricket as a finishing school for our youngsters. We need to produce our own cricketers through our domestic structure and programmes like this one will support that development work.”

Jack Tector, the 22-year old batsman that plays for YMCA Cricket Club, will head to Port Elizabeth in South Africa for six weeks to play for Old Grey Cricket Club and work under the watchful eye of former Ireland Coach Adi Birrell.

“I’m delighted to be awarded this opportunity as part of the Ed Joyce Scholarship Programme. Cricket in Ireland is at a really exciting time and this is another fantastic chance to go abroad and further my game. As part of the programme I will be doing three sessions a week with Adi. To be able to work with such an experienced coach in a 1-on-1 environment is something which I’m really looking forward to.”

“I’d like to thank Joycey and everyone who was involved in setting up this programme, Tyrone and I are extremely lucky to be the first recipients.”

Tyrone Kane, the 24-year old all-rounder that plays for Merrion Cricket Club, will head to Perth in Australia in October 2018 for 10 weeks where he will play for University Cricket Club.

“University Cricket Club are not only a very good club who reached the grand final last year, but also the current club of Australian test player Ashton Agar. In tandem with the club fixtures and training, I will be attending the Stewart Walters camp mid-week for extra sessions.”

“It’s an unbelievable opportunity for young players to get away and this wouldn’t be possible without Ed’s help through this wonderful scholarship. I know Jack and myself are extremely grateful and appreciate being the first recipients of the programme.”

“I hope this opportunity will ensure I continue to improve on all aspects of my game. With the availability of great facilities and undoubtedly a competitive environment, having the chance to play and train in Perth in such surroundings will enhance my skills and will allow me to come back to Ireland and hit the ground running - hopefully cementing my place in the Senior men’s team.”

As part of the agreement, both players will remain available for international call-up if the occasion arises during the time of their placements, and both players will regularly share updates from their experiences over the coming months through the Cricket Ireland website.

Cricket Ireland expresses its appreciation to Ed Joyce for his ongoing commitment and support in developing the next generation of Irish cricket talent.