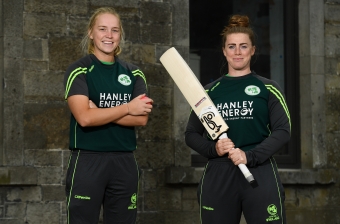 Kim Garth and Mary Waldron at the eFlow announcement

DUBLIN – Cricket Ireland has welcomed the support of eFlow and Sport Ireland, after the two entities signed a partnership to support Ireland’s elite athletes - which includes the six contracted players in the Ireland Women’s squad.

Eleven national sporting bodies who have either a full or part-time training centre at the Sport Ireland Campus will benefit from this sponsorship in the lead up to the international competition. The sponsorship will see up to €3,000 worth of tolls assistance made available to the six players when accessing the Sport Ireland National Sports Campus via toll roads for training.

“The support from eFlow and Sport Ireland is a timely one, given the end of the home season means most of the senior contracted players will be spending a great deal of time travelling to and from the National Sports Campus. The contribution is welcome recognition for the hidden costs that many athletes typically bear in pursuit of their sporting dreams and we hope that this partnership may even lead to other companies looking at how they can play their part in supporting Irish sport.” Image: Mary and Kim feature amongst some of Ireland’s elite athletes at the announcement

Gaby Lewis heads Down Under

While welcome news for the six cricketers involved, one player who will not be seeking to utilise the support immediately is Gaby Lewis, who has just departed for a six-month stint playing club cricket in Australia:

“When I went on the ICC Rookie Programme with the Melbourne Renegades during the 2017-18 season, the assistant coach Carl Sandri invited me to come back to play for the club he coaches [Prahran Cricket Club]. It’s taken 18 months or so, but I’m now taking him up on his offer.”

“This will be the second time I’ve been to Melbourne – the first being when I was on the Rookie Programme - it’s definitely been my favourite place I’ve been to in Australia, so I’m looking for to spending an extended time in the city and playing some competitive cricket. My goals are to play as much cricket as possible, train as hard as I can ahead of the 2020 season, and also test myself constantly against top quality opposition. And of course to enjoy the sunshine and the Australian coffee!”

Lewis will return to Ireland at the end of March 2020 ahead of a summer that will include a 50-over World Cup Qualifier in July. Image: Gaby Lewis is in Australia for six months