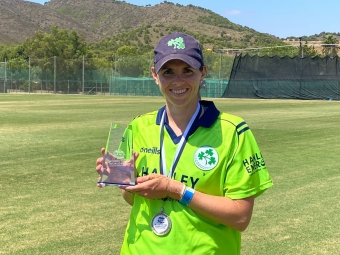 Eimear Richardson with Player of the Tournament award

While only top spot in the European Qualifier progresses directly to the Global Qualifier in 2022, there is another potential opportunity available for Ireland to also progress, with the ‘next highest’ ranked side in Global ICC rankings going through. On present rankings, this would be Ireland, however, this will all be confirmed after the African Regional Qualifier next month.

Ireland’s final group game saw a lively encounter with the Netherlands. After winning the toss and sending Ireland into bat first, the Dutch bowlers delivered an early spell of economical and aggressive bowling, most notably form Iris Zwilling (3-14) who accounted for the early wickets of Rebecca Stokell, Laura Delany and Leah Paul.

By the halfway stage Ireland has stabilised the innings at 44 for 3, with Eimear Richardson and Gaby Lewis at the crease. The pair put on 60 runs for the fourth wicket at nearly a run a ball, until Lewis departed in the 15th over for 32 off 39 balls, which was followed by a mini-collapse which saw Ireland lose 3-2 in the space of an over.

Despite this, Richardson looked to carry on aggressively, only departing in the final over after scoring only her second T20I half-century - a crucial 53 from 49 balls, with Ireland finishing on 111-9. Once more Ava Canning delivered with the ball early for Ireland setting a positive tone in the powerplay, ending with figures of 1-14 from four overs. Her first tournament for Ireland saw her play three matches and finish with 3 wickets at an average of just 7 runs apiece. This opening powerplay left the Netherlands on 23-1, and as the field started to spread, Irish skipper Delany turned the spin of Richardson and Cara Murray, and her own medium-pace. Both Murray and Delany claimed three wickets each as Netherlands crashed from 50-1 to 63-8 in the space of four overs.

Robine Rijke (32) looked the most dangerous, but Murray’s intervention and Rijke’s subsequent dismissal seemed to end the Dutch chances of an outside win.

Eventually, the Dutch finished on 87-9, with Richardson taking the double honour of Player of the Match and Player of the Tournament. Richardson’s return from her four appearances was 7 wickets at 7.28 runs apiece and 76 runs at 38.00.