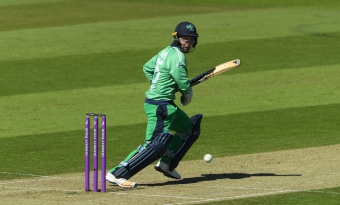 SOUTHAMPTON - England overcame Ireland by six wickets in the first ODI of the three-match series between the sides at the Ageas Bowl, despite an excellent all-round performance from Curtis Campher on international debut.

The youngster became the first Irish player, and 14th overall, to score a half-century and take a wicket in his maiden ODI, rescuing Ireland with the bat before dismissing Tom Banton with the ball.

At that point, England, chasing 173, were 78-4 and in a scrap. After Barry McCarthy left the field with an injury in the first over of Ireland’s reply, both openers were removed LBW, Jonny Bairstow by Andy McBrine and Jason Roy by Craig Young just as he was beginning to score freely. The latter then nicked off a similarly fluent-looking James Vince to leave the hosts three down inside 10 overs before Campher’s removal of Banton broke a burgeoning partnership between him and Sam Billings.

However, with some field-manoeuvring sweeps and crunching drives, Billings (67*) and England captain Eoin Morgan (36*) eased the building pressure to secure victory.

Earlier, Ireland were dragged from the depths of 29-5 to 172 all out by an excellent half-century from Campher. Playing just his second List A game, the 21-year-old walked in at No.7 in the seventh over to face a hat-trick ball from David Willey, who had already taken four wickets. The right-hander negotiated the delivery calmly, as he would the next 117 in his maiden knock. At that stage, only Gareth Delany, who struck five boundaries in 10 balls at one stage, had made it into double figures, with Ireland reeling early on playing their first full international since March. Paul Stirling fell inside the first over, chipping Willey to Eoin Morgan at midwicket, and Andrew Balbirnie followed soon after, nicking behind off the same bowler.

Harry Tector, Ireland’s other ODI debutant, played on off Saqib Mahmood, the first of three wickets to fall in six balls with the score on 28. Delany skewed a thick edge to backward point, while Lorcan Tucker was pinned LBW first ball, paving the way for Campher’s entrance.

A half-century stand between Kevin O’Brien and the youngster took Ireland to 79 before the former and Simi Singh fell in the same over. O’Brien attempted to go after the economical Adil Rashid but only succeeded in finding Willey at long-off, and Singh was run out.

McBrine then joined the Campher for a sterling 66-run stand, Ireland’s second-highest for the eighth wicket in ODIs. Campher was content to hold up an end and let McBrine play around him, with the latter striking the only six of the innings in his 48-ball knock. He fell pulling, caught by Sam Billings off Tom Curran, but Barry McCarthy and Craig Young stuck around for long enough to help Ireland past 150 and near to 175. The latter fell to Willey, who claimed his maiden ODI five-wicket haul.

Campher meanwhile was unmoveable, finishing unbeaten on 59, the second-highest score by an Irish ODI debutant and the second-highest by a No.7 on men’s ODI debut from all teams. His day wasn’t quite done yet, but England would have just enough firepower to ease home.

The result meant England claimed 10 points from the first ICC Men’s Cricket World Cup Super League fixture. The next game in the series, which also counts towards the Super League, will take place at the same venue on Saturday, 1 August starting at 2pm.