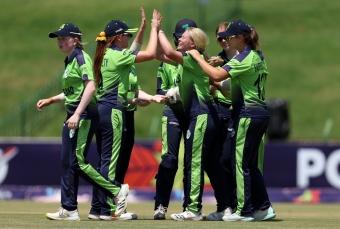 A wicket for Freya Sargent on her birthday

POTCHEFSTROOM, South Africa – Ireland Under-19s Women’s side has fallen to defeat by an aggressive England in their first match of the Super Sixes stage of the ICC Women’s T20 World Cup at the JB Marks Oval today.

A wicket apiece to Ireland’s Aimee Maguire and Freya Sargent – both bowled – were the only dismissals in the first innings as England put on 207-2 from their 20 overs. The English batting line-up was led by captain and Player of the Match Grace Scrivens who smashed 93 from 56 balls.

Despite the clinical English batting, Ireland’s heads did not go down and they deserved their two wickets with left-arm spinner Maguire finishing with a creditable 1-24 from three overs.

With a mountain of a target ahead, England pressed home their advantage in the powerplay, reducing the Irish top-order to 34-4 after six overs. Abbi Harrison (16) and Siúin Woods (13) put on a 22-run stand which featured three counter-attacking shots to the boundary, but when Woods fell the end came soon after. The last five wickets fell for 23 runs, however, to complete a good all-round performance by Maguire was capped off with a late 14 from 15 balls.

Ireland will return to action on Monday against Pakistan in their final tournament outing at North-West University Oval, starting at 1.45pm (local time) or 11.45am (Ireland time).