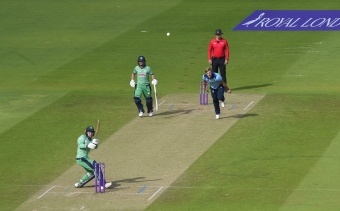 SOUTHAMPTON - England took an unassailable 2-0 lead in the three-match ODI series against Ireland today, earning victory by four wickets at the Ageas Bowl.

Ireland captain Andrew Balbirnie won the toss and chose to bat first, however despite a more solid-looking batting performance early, wickets tumbled and Curtis Campher was required to resurrect the Irish innings once more.

Willey – England’s star bowler on Thursday – removed Gareth Delany for 0 and Paul Stirling for 12. Balbirnie was just settling in before James Vince – surprisingly called into the attack by Eoin Morgan – induced an edge to the keeper, with the skipper caught in two minds as he unsuccessfully attempted to pull out of a cut shot.

Kevin O’Brien fell for 3 after Adil Rashid unfurled a brilliant googly, and Harry Tector (28) provided the England leg-spinner with his second scalp of the day, as Saqib Mahmood took a straightforward catch at mid-on. Lorcan Tucker advanced to 21 but fell top-edging a sweep shot to Reece Topley at short fine leg. At 91-6, Ireland were in big trouble courtesy of Rashid’s three-wicket spell.

Campher shifted the tide, first alongside Simi Singh (25), and then with Andy McBrine (24). The Ireland No.7 was watchful to begin with, taking 78 balls to reach his second ODI fifty in his second match, but there was plenty of adventure on show in Willey’s final over, with an audacious reverse scoop from the all-rounder his third and final boundary of the over. The 21-year-old eventually fell for 68 to Saqib Mahmood – handing him an ODI batting average of 127 – and Ireland finished on 212-9 after Topley claimed a final-ball dismissal of McBrine.

Despite the early loss of Jason Roy to Craig Young for a duck, Jonny Bairstow stamped his authority over the England innings. While the impressive Campher removed both Vince and Tom Banton, at the other end Bairstow was scoring freely, smashing 14 fours and two sixes as he advanced to 82. His half-century arrived from just 21 balls – the joint-fastest for England in the format.

But then Ireland began to fight back, as Josh Little took three wickets in quick succession: Bairstow feathered an edge behind from a cut, before Morgan and Moeen Ali perished for ducks. With England in an awkward position despite having over 30 overs in the bank.

Nevertheless Willey and Billings settled any nerves for the hosts guiding their side to victory by four wickets, and sealing a 2-0 lead in the three-match series.