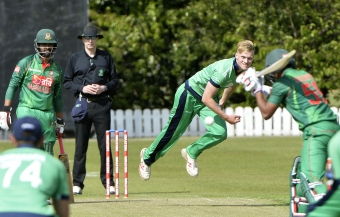 Cricket Ireland has today named a strong Ireland Wolves squad to face English opposition ahead of a big summer of cricket.

Peter Johnston, Head Coach of the Wolves and Academy and Performance Manager for Cricket Ireland, was delighted with the range of emerging and established talent selected.

“We created the Ireland Wolves team in 2017 to begin to bridge that gap between domestic and international cricket – to provide an opportunity for a selection of centrally-contracted senior players and the best emerging talent to play together in high-standard, competitive cricket matches,” said Johnston.

“The players selected all understand the opportunity that Wolves selection promises. Not only is it a great opportunity for players to set a marker for the season, but – like James Shannon and Simi Singh who performed strongly in the respective tour last year – it can help springboard their seasons and even lead to further national representation at senior levels.”

The Wolves team will be captained by Jack Tector, who has recently returned from a stint playing club cricket in Australia with Randwick Petersham Cricket Club, and will be strengthened by having the experience of Peter Chase leading the bowling attack.

“It is great to see Neil Rock and Harry Tector earn their first Wolves call-ups off the back of a very successful Under-19s Cricket World Cup in January, as well as Stephen Doheny who just missed out on that World Cup by being a couple of days over age,” said Johnston.

“The selectors have also called up Fionn Hand, who has been impressing with bat and ball, however Josh Little was not included as the upcoming fixtures clashed with his school examinations.”

The squad will benefit from an Academy Training Camp in La Manga (Spain) immediately prior to the tour, which will provide warm-weather play on grass wickets.

The squad named is as follows:

The coaching staff consists of:

The Ireland Wolves was established in 2017 as a joint Ireland ‘A’ / Shapoorji Pallonji Cricket Ireland Academy side. The Wolves provide a vital link in our player pathway and have been formed to transition players from Provincial Cricket through to the Senior Team. The goal of the Wolves programme is to test players with meaningful challenging and appropriate fixtures.