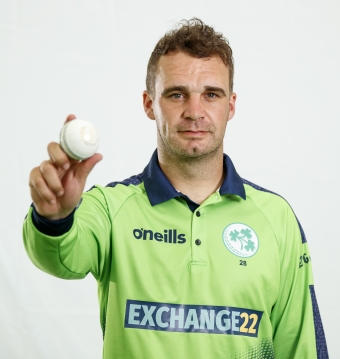 Exchange22 are the new Principal Sponsor for Ireland Men

DUBLIN – Cricket Ireland has today revealed Exchange22 as the Principal Sponsor for the Ireland Men’s cricket team for 2022.

EXCHANGE22 is an Indian-based, first of its kind sports fantasy App – a virtual sports stock exchange. Founded in 2019, the app’s unique concept is one which players’ shares are traded virtually. The shares can be bought/sold/held as per the wish of the user. On their platform, the user can trade in single or multiple shares and receive returns easily.

In further sponsor news, Mr Akhil Sarin, Head of Acquisition from Stake.com , the “Presenting Ground Sponsor”, will be presenting the winner’s trophy.

“The whole team at EXCHANGE22 feels highly honoured to be the jersey sponsor for Ireland Men during a busy 2022. This is our second association with the squad, having supported the team at the ICC Men’s T20 World Cup in 2021.

“Irish cricket is certainly a sport on the rise, and similarly EXCHANGE22 is also breaking through barriers and delivering on our ‘field of play’.

“Also, our sincere gratitude to team ITW for putting their efforts into making this collaboration successful. We believe in uplifting the spirit of the game and look forward to many more collaborations of this kind in the near future. We wish the Irish team the best of luck for the rest of 2022 and hope to see some awesome cricket moments from them.”

“We at ABD and Sterling Reserve are very happy to be associated with Cricket Ireland for the India matches and all their games with New Zealand, South Africa and Afghanistan leading to the ICCT20 World Cup. Sterling Reserve, from ABD, is about making moments ‘Come Alive’. We believe that Team Ireland has the capability to do that against the best”.

“As the presenting ground sponsor for the Ireland v India T20I series, 2022, we are looking forward to the cricketing action featuring an exciting Irish team and one of the top sides in the world - India. We look forward to a highly competitive series between two exciting teams – it is set to be a great spectacle for global cricket fans.”

“A sincere thanks to the teams at EXCHANGE22 and ITW Consulting for bringing this partnership together. We’ve already shown through a previous collaboration that the value of partnerships like this one goes far beyond just the immediate support for the team – it supports the grassroots and performance structures that are the foundations of the sport in Ireland. We also welcome Sterling Reserve – together we provide a solid foundation for our players to perform on what has become a truly global stage.”